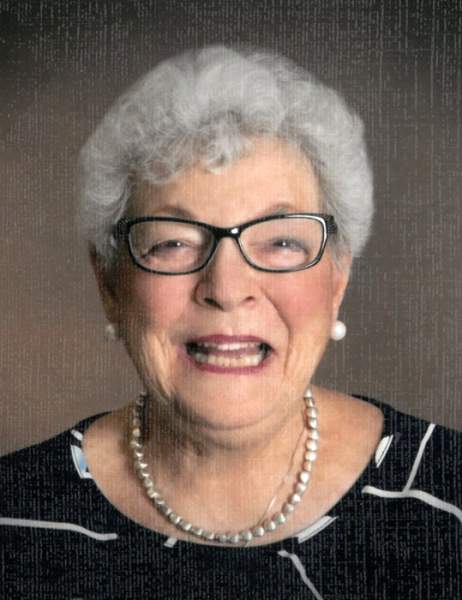 You always knew where you stood with Anita Garofalo. Whether it was the slightly arched eyebrow or a few well-chosen, firm words, she told you exactly what she thought. Anita’s eldest daughter, Laura, has always said, “When they made Anita, they broke the mold!” We can all attest she was one of a kind. Uniquely, classically Anita.

Anita was born in New York City to Dominic Tripoli and Ann Sidoti. Following her high school graduation, Anita worked as a secretary at a bank in Manhattan. She met the love of her life, Frank, when he spotted her at a 1954 New York City USO dance and asked her name. She answered and asked his. He replied, “Frank Spaghetti!” She was smitten and they married on August 27, 1955 in Rego Park, New York. Frank was devoted to her and affectionately dubbed her “Cookie.”

Anita and Frank moved to Wichita in the summer of 1956 with their infant son, Paul. As Anita would put it, they moved to Wichita “so they could eat” when Frank took a job with The Wichita Beacon as a staff reporter. Anita’s love for Frank gave her the courage to leave family and friends 1,400 miles away, and move to a city and a state that were quite foreign to her. Frank became a noted investigative reporter for The Wichita Beacon and the The Wichita Eagle, retiring in 1992. Anita supported Frank’s career and often welcomed his colleagues into their home and around the table.

They quickly outgrew their basement apartment in College Hill and moved to a larger apartment on East Harry as they welcomed daughters Laura and Kathy. Frank and Anita bought their first home on El Monte in 1961. The house was always alive with delicious food, stimulating conversation, lots of Italian love and laughter, and of course Anita’s final ruling on all disagreements. Anita was certainly the disciplinarian of the Garofalo clan and her daughters have quite the collection of stories that would leave you in stitches. Anita was a devoted grandmother to her granddaughter Elyse Marie, grandson Joshua Paul, and Todd Bradley. She was adored by her great grandsons Lucca Francis (who inherited her gift for gab) and Sonny Lewis (who inherited her love of food).  She was affectionately known by the boys as Gigi.

Anita loved to cook and her Sicilian cuisine was even admired by the Angelo Fasciano family. Her salad dressing was sometimes consumed as a soup course by her godson Steve. Anita opened her heart and home to all. She was compassionate, fiercely loyal, always the life of the party, and was known and loved as Grandma (G) to so many. Anita enjoyed reading, eating, gardening, cleaning, binge-watching, and shopping.

Their beloved son Paul, a Wichita Police Department patrolman, was murdered as he sat in his patrol car in the midst of a large crowd in November 1980. She never reconciled that shocking crime and not even her deep Catholic faith could provide adequate consolation. Despite her incomprehensible loss, she always proceeded through life with a positive attitude and a jaunty disposition to seize the day and make the most of what was given.

Anita’s tenacity was tested again this past May when she began dialysis. She fought hard, despite numerous setbacks and complications. Anita suffered a grievous fall that made continued dialysis impossible. Like the tough gal she was, and despite the five to seven days she was given to live without dialysis, Anita defied the odds and fought for 10 days.  Anita always stated the God wasn’t ready for her yet. We suspect it took God the 10 days to prepare for her glorious arrival. And oh, what a party it was.

In lieu of flowers the family has established a memorial with:

We are so very grateful for the love and support you have bestowed upon Anita and our family. Special thanks to Team Anita and the exceptional staff at Harry Hines for your compassionate care.

For those who knew and loved her, the world has lost a beautiful soul.

To order memorial trees or send flowers to the family in memory of Anita Garofalo, please visit our flower store.

Church of the Resurrection