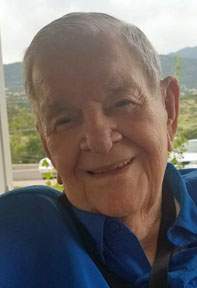 Bobbie V. Wortman, 95, Disabled WWII Veteran and retired Civil Servant McConnell Air Force Base, passed away Thursday, August 26, 2021 in Colorado Springs, CO.  He was preceded in death by his wife, Marjorie; parents, Alfred and Annie Wortman; daughter, Terri Wortman; grandson, Christopher and brother, Marvin Wortman. Survivors include sons, Bobbie D. (Ann) Wortman and David P. Wortman; grandchildren, Jeremy, Jessie and Amanda Wortman and great-grandson, Amaré Wortman. Bob was the recipient of a Purple Heart on 28 April 1945, a Bronze Star Medal 30 November 1984, and the French Legion of Honor March 31 2015.  During the 2018 Warrior Games at the United States Air Force Academy on 2 June 2018, Air Force Chief of Staff Gen. David L. Goldfein formally presented the French Legion of Honor to Bob Wortman as a World War II Army Veteran for his efforts to liberate Western Europe in 1945. During the ceremony, Gen Goldfein stated “All of us in the services today enjoy the trust and confidence of a very grateful nation. That grateful spirit is not all because of what we do, but it is in part due to the incredible legacy passed on by (Wortman) and those (he) served with, members of the greatest generation.” The French Legion of Honor citation read, “Thanks to your courage and our American friends and allies.  France and Europe have been living in peace for the past many decades…Created by Napoleon, it is highest honor France can bestow for those that achieved remarkable deeds for France”.   When Bob was asked what the medal meant for him… he said just one word.  “Everything”.  Bob joined the army in 1944 and became a scout for the 3rd infantry which was sent to the front lines and then behind enemy line, crossing the Rhine River in the second wave.  Days later a surprise by German hold outs in Nuremberg wounded Bob forcing a leg amputation.  After spending 3 weeks recovering in hospital in France, Bob was flown home for a long and lengthy rehabilitation and recovery.   Bob never let his injuries slow him down.   After his time in the service Bob worked in the automotive business for a while and finally went back to serving his country as a Civil Service employee at McConnell AFB, where he retired.   He worked hard every day to live a great life full of family, friends, “good home cooking” and of course cars.   It is uncertain as to how many he owned in his lifetime.  This is a memory the family can treasure – during the next big car auction on TV.  “Dad or Grandpa owned that car” It’s too bad he didn’t keep them all.  This is final farewell and “Thank You for your Service” to the another from “Greatest Generation”.

To order memorial trees or send flowers to the family in memory of Bobbie Wortman, please visit our flower store.