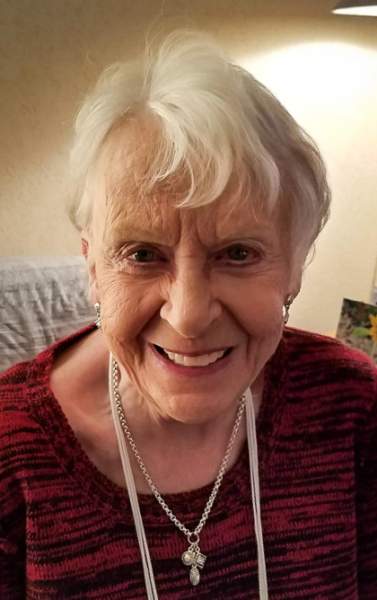 Carol Ann Allen, 81, retired Corporate Secretary/Treasurer, Allen Millwork Co. passed away Monday, April 11, 2022. Per Carol's wishes no Services will be held, and her body has been donated to KU School of Medicine for medical research. Survivors include her husband of 61 years, Jerry; son, Jay (Lisa) Allen; daughter, Cindy Allen; grandchildren, Matthew Allen and Megan (Jesus) Ornelas. Carol was preceded in death by her parents, John Cole and Bernice Gillig and her sister, Johnna Luck.

Carol Ann Cole was born October 9, 1940 to John and Bernice Cole in
Great Bend, Kansas. She was raised as an only child for the first 5
years until her only sibling Johnna was born. Her mother's family was
large and so she was raised amongst lots of fun and loving aunts,
uncles and cousins. The family moved to Wichita in 1945 and when Carol
went to junior high she met and fell in love with her future husband and
life partner Jerry Allen. They were proud class of 1958 graduates of
Wichita North High and enjoyed participating in reunions with their
classmates.

In the early years Carol helped to put Jerry through college at Wichita
University and they soon added to the family with 2 children, Jay in
1963 and Cindy in 1966. Jay went on to go to college and graduated with
honors which always made her proud.  He then married a beautiful girl,
Lisa Hoover and they gave Carol and Jerry their only 2 grandchildren,
Matthew and Megan.  Jay is now the third generation running Allen
Millwork Co., the family business.  Cindy tried college but it didn't
stick and she now has a second family with her career as a bartender at
Savutes Italian Restaurant where she has been now for 29 years.

As a young couple Carol and Jerry did their best to show the kids the
country and they took many family trips to lots of fun and educational
places.  Carol was a great vacation planner and always made sure that
everyone was included in the fun wherever they went.  Most trips were in
the family station wagon with the kids bickering in the backseat, but
Carol always had car games for them to play to try to keep them
occupied.  There was Table Rock Lake and Silver Dollar City, skiing in
Colorado, trips to racetracks to watch SCCA road races and loads of
museums and mini golf along the way.  On one trip she even found herself
playing nurse when Cindy's mini-golf backswing smacked Jay on the bridge
of his nose causing quite a bit of discomfort for him and mild hysteria
in her.  Thankfully, Jerry always kept it together for them.  They were
together through thick and thin for 61 years, or as they liked to say
122 years combined.

After the kids were grown and gone they got to do more traveling as they
liked it.  They traveled extensively to watch their beloved Shockers
play baseball and basketball as far as California and Hawaii. One of her
favorite trips was a cruise they took in Alaska.  She and Jerry also
visited Europe.  They ended up traveling to all 50 states in their 61
years together and she counted every one of those years a blessing as
she was with the love of her life.

Carol had many bad years because of her health as far back as 1970. She
was diagnosed with Cushings disease and had lung problems that ended up
with her having to have her left lower lobe of her lung removed.  Later
in her life after she'd overcome all of that she began having serious
arthritic problems and was diagnosed with rheumatoid arthritis.  Because
of all these health problems she and Jerry both decided that on their
deaths they would like to donate their bodies to science to possibly
help someone in the future.  So, per her wishes there will be no other
services.  A memorial fund is set up through the Arthritis Foundation.

To order memorial trees or send flowers to the family in memory of Carol Allen, please visit our flower store.