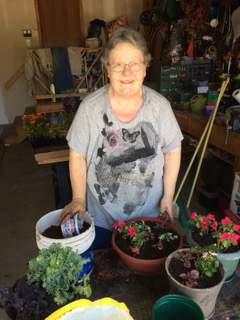 The beauty and wonder of God’s child, Carol Sue (Seefeldt) Oppriecht, was displayed in her giftedness in taking common cuts of cloth and simple artifacts to decorate the front of the sanctuary to silently bolster and support gospel messages being proclaimed Sunday after Sunday from her husband’s pulpit. Carol did all of this, in the midst of being God’s helpmate to her pastor husband. The story is told that she read more of his seminary text books than he did, and it was only with her encouragement and creative assistance in learning Greek and Hebrew he was able to graduate!

Carol was a registered nurse her entire life having earned her Nursing Diploma in 1968, then going back to college completing her BSN degree when she was in her 50’s. She gave generously of her time teaching GED and mentoring younger women while using her nursing skills to bless others. She also enjoyed volunteering as a Camp Nurse, a Parish Nurse and working with various Area Agencies on Aging to assist families working through the very real needs of their aging parents. Carol served on the WMREF (Wichita Medical Research & Education Foundation) Scientific Review Committee for several years that allowed her to give input from a nurse’s point of view in a room full of doctors.

Both planting an abundance of flowers and vegetable gardening brought great pleasure for Carol. The vegetables that were often grown in abundance, after being harvested and preserved, adorned the shelves of her pantry not only nourishing her family but also regularly being gifted to others…. as long as they agreed to return the mason jars to be refilled the next season! Quilting, carding, sewing, cooking, canning, and reading – all found a place in her life. In additional she took such great joy in spending time imparting to her grandchildren both life skills and biblical attitudes that would result in productive and godly individuals.

Most notably though, Carol was a Prayer Warrior. Praying for missionaries, families, world situations, individuals, and whatever God laid on her heart. This often would happen over a teatime with another who would pray with her. This was not only a joy but a real sense of calling for her. In addition to being a student of the Word, Carol was a researcher and would dive deep becoming an expert in topics that interested her. Being active in regional prayer ministries, spiritual mapping and biblical discipleship was as natural as breathing in and breathing out.

Her story is not complete without recognizing she was a breast cancer survivor of over fourteen years having undergone multiple invasive treatments to hold this enemy at bay as long as possible. She studied this enemy intensely and shared her growing knowledge with many fighting a similar battle. Never complaining, never refusing to do the hard and painful things this journey demands. That she was a strong and capable fighter her whole life showed all the way to the end. Her determination and will to live and love well was evident to all. Carol successfully crossed the finish line on February 18. 2020, honoring the Jesus she loved with integrity and faithfulness being received by Him and desiring to hear Him say, “Well done, good and faithful servant!”

Carol was born on February 4, 1947, in Rockford, Illinois, the oldest child of John Richard and Myrtle Ileen (Goodsell) Seefeldt. Carol met the love of her life while working at Pioneer Camp in Green Lake, Wisconsin, and she and Kermit Oppriecht were joined in matrimony on June 15, 1968, in Granton, Wisconsin. Their marriage was blessed by their three children and nine grandchildren. Carol was preceded in death by her parents and her sister, Kathleen Kay Seefeldt. Carol is survived by her husband of almost 52 years, her three children and their families, Eric & Desta Oppriecht of Kansas City, MO and children, Zion, Zoe, Zeke and Zackary; Ethan & Mindy Oppriecht of Derby, KS and their children, Noah and Emmalee; and Erin & Ben Olson of Mc Louth, KS and their children, Kenyon, Aniyah and Landen; her brother James Seefeldt of Neillsville, WI, and many nieces, nephews and friends. Visitation with the family will be held from 5:30 p.m. - 7:30 p.m. on Sunday, February 23, 2020 at Broadway Mortuary, 1147 S. Broadway. Funeral Services will be held on February 24, 2020 at 10:00 a.m. at First Presbyterian Church, 324 Baltimore, Derby. Memorials to; International House of Prayer - Kansas City ( https://www.ihopkc.org/) and the LUKE Society ( http://www.lukesociety.org/get-involved/donations/). Share condolences at www.CozineMemorial.com. Services by Broadway Mortuary.

To order memorial trees or send flowers to the family in memory of Carol Oppriecht, please visit our flower store.