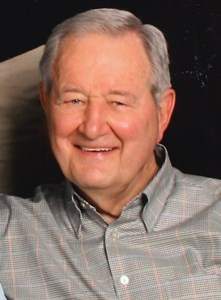 Dan Robison, 88, of Wichita, KS, passed away peacefully Friday, August 19, 2022, in Jupiter, FL surrounded by his loving family. His legacy lives on through his wife Sondra, their three children, and grandchildren.

Dan was born on April 10, 1934 in Barnard, MO to Virgil and Lucile Robison. In his early years, Dan's family moved to Kansas, where he attended Topeka High School. An avid musician and athlete, Dan played the trumpet for the high school band and was captain of the varsity basketball team. His achievements and friendly demeanor resulted in being named King of the All School Party. His success on the basketball court was rewarded with a personally written letter from Phog Allen inviting him to play for the freshman squad at the University of Kansas. After a year at KU, Dan returned home upon the death of his father, where he continued his athletics and studies at Washburn University. Love came knocking on his door during his senior year when he met Sonnie Tate (Sondra), who became his wife and the love of his life for 66 years.

His love for Sondra coincided with his love for his country as he entered the United States Air Force in 1954 after graduating from Washburn’s ROTC program with a commission as a 2nd Lieutenant, becoming a pilot. Dan's fondest aviation memories were his years of piloting the B-47 bomber along the eastern seaboard and later commanding his own plane for trips with family and friends. After 6 years serving as a Captain in the Air Force, Dan started his post-military career in banking at First National Bank in Hutchinson, KS. Not long after, he accepted an offer for a career change, becoming the manager of the Hutchinson Clinic, a position he held for 20 years. His years in healthcare also included positions in management at the Cotton-O'Neil Clinic in Topeka, KS, and physician recruitment at St Francis Hospital in Wichita, KS. In addition, Dan served several political roles during his time in Hutchinson, most notably as City Mayor.

Although Dan held many titles throughout his life, his favorite was “Dad”. Dan and Sondra raised three children; Dan Jr., D’Ambra, and Jon. They brought great joy and laughter to his life and he was always there to watch the many ball games, dance recitals, and music concerts, never failing to tell them how proud he was, even as adults.

Upon retirement, Dan and Sondra were able to do what Dan loved most, spending time with his family and friends. He spent 5 years in England, alongside his son, Dan, Jr., helping to start a European telephone company. He never stopped talking about his love for the English countryside and the occasional 5 O'clock lager at the local pub. Retirement also took Dan to Topeka, where he was fortunate to watch his beautiful granddaughters, Morgan and Katelyn Gray, grace the halls of his high school alma mater. He was very proud of them, telling everyone about his intelligent and successful young granddaughters, and they loved their "papa". Dan's daughter D'Ambra, and her husband, Martin, shared in those times in Topeka with Dan and Sondra, where they shared many Thanksgiving meals and Saturday trips over to Lawrence to watch Dan's "other true love"--the Kansas Jayhawks. Dan and Sondra spent a good portion of their retirement years in Florida as well, spending time at Jon’s house in Ft Lauderdale and watching the yachts cruise by on the Intracoastal waterway. Dan loved the Florida life; palm trees and ocean breeze. He loved being in Florida with his "boys”, which also included his handsome and talented grandson Brody. Not only was his family and wife his priority, Dan was a true believer and servant of the Lord. His years in Topeka, Hutchinson, and Wichita were filled with memories of countless church friends and time dedicated to his Christian faith, serving as a song-leader, volunteer missionary, Elder, and board member of the Christian charity His Helping Hands. Dan lived life as his Christian faith taught him; loving God, his family, and being a friend to all. Dan refused to speak a negative word about others and was a happy, positive, jovial, kind, and gentle soul to all he met.

A memorial service will be held at 2 pm on Monday, Sept 12 at Central Christian Church chapel, 2900 N Rock Rd., Wichita, KS 67226. In lieu of flowers, contributions can be made to the following:

To order memorial trees or send flowers to the family in memory of Dan Robison, please visit our flower store.