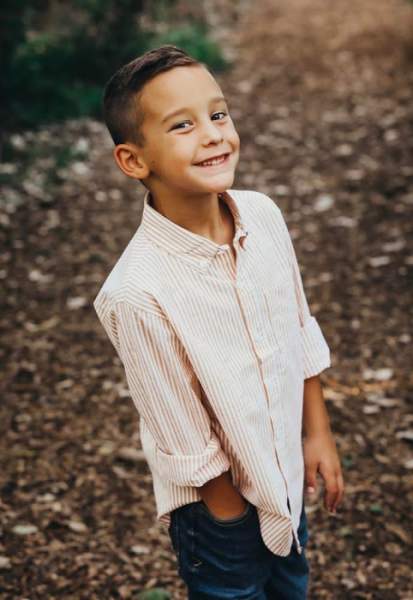 Deacon Douglas was born on September 5, 2013. Six days later, our lives were forever changed for the better when he was dropped off at our house. For the first month, he was sleepy and calm. Rarely making demands, he preferred to be snuggled up with one of us or his obsessively adoring sisters, Taryn, Brecken, and Aven. At 1 month old, he began to take notice of the world around him. He learned to appreciate a good meal, share smiles, and grow countless squishy rolls.

On February 9, 2015, the adoption court confirmed what our hearts already knew—Deacon Douglas Claassen would forever be a part of our family. His next years were spent LIVING. He divided his time between awing us and turning us prematurely gray: He jumped into pools and swam to the side at 1, rode a bike without training wheels at 2, learned to dive at 3, went to his first K-state football game and Monster Jam at 4, jumped off his first cliffs at 5, rode a kneeboard and started piano at 6, and picked up skateboarding and ramp building at 7.

When Deacon was 17 months old, little brother Madden joined our family and Deacon’s greatest role was solidified: brother. With three sisters and a brother, Deacon thrived under our house of noise and love. These five formed a bond that can only be forged in the trenches of childhood: playing, fighting, snuggling, shoving, uplifting, and name-calling. They were a group not needing blood to join them but only deep, deep love.

Deacon’s second favorite role was foster brother. We welcomed dozens of children into our family over the years, and he adored being their brother, whether it was for a couple days or a couple years. He had an innate way of seeing their hurt and trauma and then giving them space to grieve but also a distraction full of games and laughter. He would ask us weekly, “Can we go pick up a kid from the Children’s Home today?”

He also loved God. Deeply. First Evangelical Free Church was one of his favorite places to be, and the teachers, staff, and classmates there were all instrumental in helping to form his faith. His love of God was most exhibited in his love of others. He was wildly and fearlessly inclusive, seeing no reason he couldn’t talk and play with any age, race, gender, or mental and physical ability. He saw every person as worthy, valuable, and an opportunity for fun.

He was loved by so many and will be remembered by those left in his exuberant wake. His siblings, Taryn, Brecken, Aven, and Madden. His grandparents, Ralph and Debora Claassen and Dan and Barbara Rexroat. His aunt Colinda Startling as well as four other aunts and four uncles, and nine cousins. His great grandparents, Leland and Julie Stucky.

When we were called to be Deacon’s mommy and daddy, we had no idea how our lives would be transformed. His never-stopping, always-pushing, never-meeting-a-stranger personality pushed us and made us better. By the time he was 3, we were no longer just Lindsey and Derek, but now “Deacon’s mom” and “Deacon’s dad.” This would come from a parent, teacher, or someone Deacon met in any of a variety of chance encounters. People constantly sought us out, asking “Are you Deacon’s parents?” and then sharing a story of how he had shown kindness to their child with special needs, included their child who felt alone, or just made them laugh with a unique story we would retell for years.

If you’re wondering what part of Deacon’s mantle God is asking you to pick up, we think he would suggest this: Do It Anyway. Fear of jumping off that cliff, becoming a foster parent, trying that new hobby? Do it anyway. Nervous about mending a relationship, talking to a new person, stepping out alone? Do it anyway. Anxious about witnessing to that waiter, celebrating someone’s differences, or hopping on that skateboard? Do it anyway. Deacon proved that life can be abundantly lived in 7 years. So, if your conscience or someone else tells you no or you can’t, please remember: Deacon would have done it anyway.

The Video Tribute link has been provided by the Claassen family.

Please click here to view the video tribute
To order memorial trees or send flowers to the family in memory of Deacon Claassen, please visit our flower store.