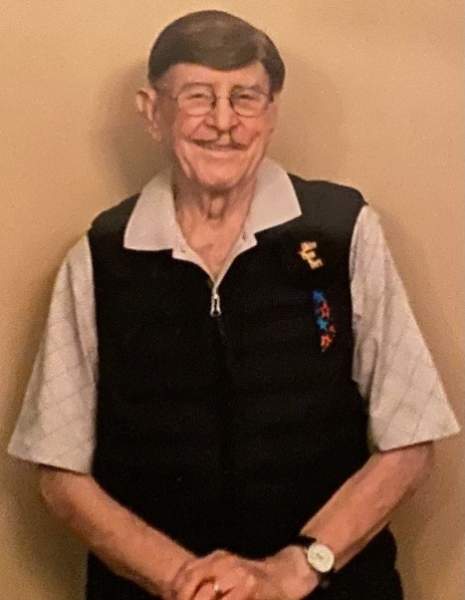 Delbert Dean White was born in Arkansas City, Kansas on Tuesday, December 8, 1931, to Orville Jefferson and Sybil (Handley) White. He passed from this life to his eternal home in heaven on Sunday, March 6, 2022, at the age of 90 at his home in Wichita, Kansas being cared for by his wife, Edna.

Delbert and his twin brother, Darrell, were not identical twins but fooled most people throughout their lives. Their stories of teachers and other adults getting them confused were very entertaining, and they remained close until Darrell passed away in 1989. Younger brother, Donald, came along a few years later. He was just as onery as his older brothers but surely got picked on until he grew taller than them. Their father was a barber and mother a homemaker. They lived in Arkansas City, Kansas, Blackwell, Oklahoma and then the family moved to Wichita where the boys attended jr. and sr. high school. The attack on Pearl Harbor happened one day before the twins’ 10th birthday. This event no doubt shaped a major decision they made a few years later. Delbert showed his athletic prowess by boxing in Golden Gloves matches, gymnastics and wresting, all at a high level, coached mainly by his father, O.J.

At the age of sixteen Delbert and Darrell, along with some of their buddies, decided to join the United States Air Force Reserves. Their plan was that when they turned eighteen, they would go active duty, but in the summer of 1948, as Delbert was driving in a convoy, the front axle of the jeep he was driving locked up which sent it end over end several times. He was thrown from the jeep, but it landed on him fracturing both his back and skull. Delbert would spend the next several months in a hospital in Fort Riley, Kansas. He remained in the Reserves for eight more years but was never called up to active duty because of the injury. Four years later a mutual friend fixed him up with a cute little girl by the name of Edna Kirby. They began dating and soon fell in love. As they began making wedding plans Edna’s father made it clear that they would have to wait until she graduated from high school. So, they married the day after graduation on May 29, 1953, in Wichita, Kansas and have been happily married and committed to one another as husband and wife for nearly 69 years. Delbert and Edna became the parents to two sons and one daughter.

Delbert’s working career began at Boeing Aircraft but after being laid off twice in six months, he decided that was no way to try to provide for his wife and their soon to be born son, so he followed in his father’s footsteps and enrolled in Barber College in Oklahoma City. About halfway through the eighteen-month training there, Wichita opened its own Barber College, and he was able to transfer home and complete his training in 1956. After a yearlong apprenticeship at another barber shop in Wichita, he was able to join his father and twin brother and they barbered together for many years at White’s Westlink Barber Shop. After their father, O.J., retired, Darrel opened his own shop, but Delbert remained the owner/head barber for another 41 years until he retired in 1998. In those years he had cut four generations of many families’ hair.

Delbert’s spiritual life began in Blackwell, Oklahoma where both he and Darrell trusted Christ as their Savior and were baptized at the same time when they were nine years old. He and Edna established their home on that faith they shared and raised their three children to know and love the Lord. He was ordained as a Deacon at Tyler Road Baptist Church in west Wichita in 1960. Delbert was a prayer warrior in every sense of that phrase. Around the kitchen table at every meal and many times late into the night Delbert could be heard praying for his family, friends and customers with opportunities and needs each had. They raised their children at Immanuel Baptist Church for 48 years where they volunteered at the Christian Life Center and in many other ways. That servant attitude did not change when they moved closer to home and joined Country Acres Baptist Church where they have made many dear friends for the last ten years.

Delbert’s hobbies were following his kids’ sports, school, church activities and his “lawn”. It was always the envy of all their neighbors and manicured better than most golf courses around.

He was an above average bowler. He and his brothers along with a couple of friends bowled in a Thursday Night Men’s League and he and Edna, along with another couple bowled in a Friday Night Couples League. After retirement, you could often find he and Edna playing a game of Rummikub. Besides his lawn, Delbert’s pride was in his family, and he will truly be missed by them as their spiritual patriarch.

Left to cherish his memory are his wife of 68 years, Edna, of their home in Wichita

Daughter, Cheryl Pearce and her husband, Gilbert, of Wichita

4 Grandchildren: Lacey Jones and her husband, Heath, of Derby

Kelly Armstrong and her husband, Dustin, of Coweta, Oklahoma

Chad Pearce and his wife, Shaina, of Wichita

Tiffanie Cain and her husband, Josh, of Wichita

1 Great, Great Grandchild due in April

And many dear friends too numerous to count.

He was preceded in death by his parents: O.J. and Pat White, Sybil and Lester Simpson, brothers: Darrell and Donald; and son, Dennis.

In lieu of flowers, the family requests donations be made to the Children’s Ministry of Country Acres Baptist Church, 8810 West 10th Street North, Wichita, KS 67212

Special thanks go to Megan and Crystal from Harry Hines Hospice who have helped so much these past three weeks with Dad’s care.

To order memorial trees or send flowers to the family in memory of Delbert White, please visit our flower store.