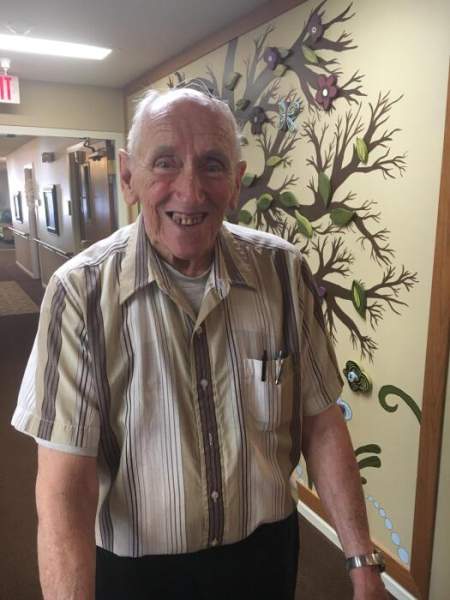 Donald Edward Reuter was born on December 18, 1937 in Gilbertville, Iowa the only child of Leo and Florence Reuter.

Don came into this world as a fighter being born 3 months premature and kept warm behind the cook stove to survive. As a boy Don enjoyed spending time at his Grandpa and Grandma’s farm and would often wait on the steps for his Grandpa to pull up in his truck honking the horn. Saying “Ooga, ooga here comes Grandpa”. As a teenager he worked in a grocery store and every Wednesday his Grandma made fresh bread so he’d make sure to stop and get a slice. Don graduated from Our Lady of Victory Catholic Academy High School in 1956.

Don began working at John Deere but quickly realized working in a factory was not for him. Eventually he found the job that he was meant for, a truck driver with Blue Line Moving/United Van Lines. He spent 40 years driving all over the United States doing the difficult job of moving people. Don could drive and park a semi like a pro and most of all he enjoyed meeting so many different people. Don met his wife of 52 years (Kathy Matthias) while working at Blue Line. After the kids were all out of the house Kathy joined Don traveling the road for 10 years before he retired at the age of 70. They spent all those 52 years faithfully by each other’s side, raising a family and making memories. One of those special memories was a 3 week RV trip around the country visiting California and Arizona, where he always wanted to visit the Grand Canyon.

Don and Kathy lived most of their married life on a small acreage outside of Cedar Falls, IA. where you would always find him working outside or in the garage with his radio playing some country music. He also loved to collect things….sometimes items people didn’t want when they moved but especially matchbox cars and hats. While Don was a hard worker, what people remember most about him was the smile he always carried on his face. He never met a stranger he wouldn’t talk to, was gracious with those around him and loved to joke around. Giving gifts was something Don really enjoyed. Sometimes he would triple wrap them just to make it a little harder to get to and at Christmas he was always famous for pulling out that one last gift for everyone just when you thought it was all done. His humor and will to fight followed him all the way up to his last days. He left an impression on all those he met and we are especially thankful for the wonderful staff at Brookdale Tallgrass for the care they provided in his final years. It was clear that his orneriness kept him fighting and his love for his wife and desire to take care of her even when his body was failing.

Don read his King James Version bible faithfully every single day and with that comfort he was called home to his Savior on Tuesday, November 30, 2021 at the age of 83.

To order memorial trees or send flowers to the family in memory of Donald Reuter, please visit our flower store.