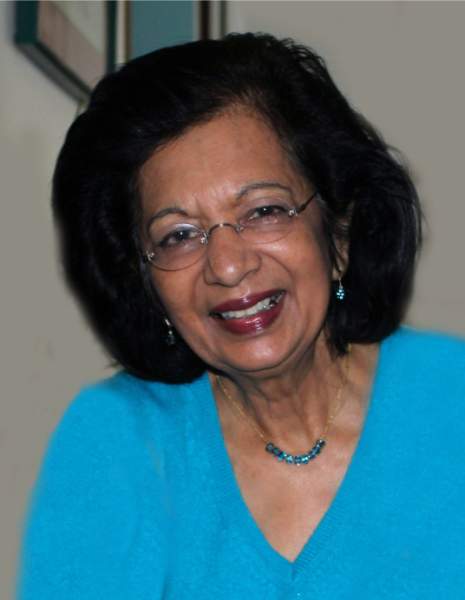 A native of Sri Lanka, Deemathie Wilhelmina de Silva, Ph.D. was a kind, strong and intuitive leader, a lifelong champion for the underserved, and revered as a role model by thousands of colleagues, collaborators and students around the world.

Deema passed away peacefully after bravely fighting a long bout of breast cancer, on September 29, 2022, at the age of 83. She survived her late husband Dr. Dharma de Silva, and lived in Wichita, Kansas since immigrating to the U.S. in the 1970s.

The oldest of a family of eight siblings, mother of four children and nine grandchildren, she was our infinite source of unconditional love, encouragement and strength.

Deema was born on April 27, 1939 in Galle, Sri Lanka to her mother Wilhelmina Turin and father Peter Dantanarayana. She grew up in a beautiful coastal town and  lived in a Dutch architectural home built by her paternal grandmother. Despite being in town, the home was tucked up in an acre of lush banana and coconut trees. Her childhood spent caring for her seven siblings and close relationships with her grandparents greatly shaped how she would raise her own family.

She graduated from Mahinda College at age 19 in 1957, an all boys school, where her father was both a teacher and the vice principal. Rumor has it that being the revered teacher’s daughter, the boys were on their best behavior when they had Deema in their class. While she met her future husband there, it wasn’t until the age of 23 that she married Dharma de Silva. In 1959, she received a Specialist in Science Teaching degree at the Government Teachers College, Colombo, Sri Lanka. Then returned to Galle to work as a science teacher at a Buddhist girls school.

Since Dharma left Galle to attend an American university, he would bring back items of interest to Deema’s family. He befriended Deema’s mother by dropping off cookbooks and magazines that he brought back from the USA. When he returned to the states for school, he would mail Deema a greeting card five days a week. After receiving 5O+ cards in less than three months, she realized he could not be ignored. The two got married on April 11, 1962 in Colombo, Sri Lanka.

They had their first daughter, Harshini, in 1963. Deema stayed in Sri Lanka while Dharma taught at Stanford on an exchange program for professors. She joined him later and got her Master’s degree in Education from Stanford University in 1964. Deema returned to Sri Lanka and served as Head of the Science Department and physics teacher at St. Clare’s College in Colombo from 1967 to 1977.

By this time, Deema and Dharma had four children. The civil war-torn country was in turbulent times. Dharma accepted an invitation to start the first International Business degree at Wichita State University (WSU). Deema and the kids immigrated to the United States in 1977 to join Dharma. The kids remember their mom had jean jackets sewn for each of them so they could “fit in” upon their arrival to the U.S.

Deema found her own path to WSU where she had multiple roles. In 1985 she was appointed Director of Student Support Services, a program for limited-income first-generation students to graduate from college. Through her efforts, she raised more than $13 million dollars through federal grants to sustain the program for thousands of students. During her 36-years, she implemented research, business management and budgeting systems that set the standard for other national programs. She also served as an assistant professor of Anthropology and co-developed courses. While working and raising a family, she earned her Ph.D. from Columbia Pacific University in 1988.

Her never-ending thirst to teach and learn is shown through her efforts to continue to expand her horizon. She was invited to speak at national and international conferences that took her to such places as University of Canberra, Australia; Nanzan University, Nagoya, Japan; Kyoto Seika University, Tokyo, Japan; University of Otago,  Dunedin, New Zealand; Florence, Italy and World Trade Centers in Malaysia, Taipei, Hong Kong, Japan and the Institute of Personnel Management in Jakarta,  Indonesia. She also had the honor of presenting at the Oxford Round Table in England.

Loved by many, Deema will be sorely missed, but her legacy carries on through her family, friends, and the students she shepherded. Known for her meticulously matched outfits coordinated with her jewelry, she embodied the notion that beauty on the inside is what makes one beautiful.

She taught us to be mindful, grateful and present. She even wrote a book titled The Art of Living the Moment, The Secret to Life’s Contentment.

Her nine grandchildren all survive her:

She is also survived by many wonderful siblings, cousins, nieces, nephews and relatives the world over.

In lieu of flowers, gifts can be made to the Wichita State University Foundation for the benefit of the Dr. Deema de Silva Memorial Fund which will be directed toward student support by the family. Contributions may be made via the Wichita State University Foundation, 1845 Fairmount, Wichita, KS 67260-0002.  Online gifts may be made at foundation.wichita.edu/memorials-honors/.