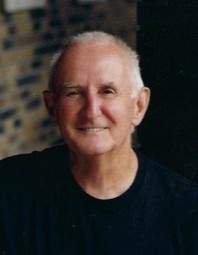 The information in the obituary is correct.  Dad was born in 1935 and he went home a few days ago.  The hand out will show you a few pictures and give you an itinerary for his service.   All of it is good and necessary.  However Peggy has given us her blessing to tell you about our Dad.   So please, let us tell you about the Ed Holick we knew.

He taught us about Jesus.  He believed.  He knew.  It was all about his Savior.  When he first really got to know Jesus he started a lifelong goal – to share everything he learned about Jesus with his family and his friends.  He talked.  He taught.  He listened.  He sang.   He experienced so much joy as he walked in his life with Jesus.  And today he walks with him in person.

He taught us to laugh.  Not a bad start.  Jesus and laughter.  He laughed his entire life.  He told jokes.  He told funny stories.  He played pranks.  We all learned to laugh at ourselves and that makes life so much more enjoyable.     Teasing happened all day, every day.  It was an awesome environment to grow up in and to live our lives in.   If you knew him, we’re fairly certain at some point, he likely told you about his ride off the roof in a wagon with his cousin.  And that umbrella’s really don’t work to slow the descent like you would think they should.

He taught us to work hard.  His career at Cessna spanned 5 decades.  We don’t remember him ever calling in sick.  Surely he did.  He must have.  But we do not have one single memory of it.  He was never late and expected everyone else to be on time as well.  We learned to work for what we had.   There was no ‘give me’.  If you wanted to go on the school ski trip – you saved for it.  We were taught and expected to work for what we wanted.   This work ethic has served us well for our entire lives.  Would he have loaned us money if we had asked?  Almost certainly.  But we never did, because if you needed it, you worked for it.  I can’t imagine standing in front of my Dad as an adult and asking for money.  It just wasn’t how life works.   It was a belief from another generation.  One that we treasure and has made us better people.

He loved sports.   And just like his love of Jesus, laughter, and hard work, he taught us all to love sports.  He enjoyed football and basketball, but his passion was baseball.   He played ball for many, many years including semi-pro ball.  He coached, he taught and he enjoyed.  Sitting in right field with my Dad, the sun beating down, chewing sunflower seeds and yelling – that was a good afternoon.    We remember him throwing a mattress in the back of the old Ford and we rode in the back all the way to KC to watch the Royals.  His memories and friends from baseball brought him years of joy.  He talked about those days even in the last week of his time with us.

He liked trains and started his work life with the railroad before moving on to Cessna.  Throughout his entire life he was very active, running 10k’s and marathons and starting the Food Bank drive for Cessna with the 24 hour run.  He climbed mountains and hills and stairs and walls.  If you built it, he climbed it.  When you went on vacation with Dad, you did not drive by the mountains and enjoy the scenery.  No.  You got out of the car and climbed the mountain.  If there was a building that was interesting, you got out of the car, went inside and climbed to the top.  Always to the top.  If your drove by a baseball stadium, it didn’t matter if it was open.  You got out of the car and walked around the stadium, checking all the doors to find one that was open.  There always was some door, somewhere that WAS open.  You went inside and took an unofficial tour until you were escorted out.  We saw some great places that way.  We went on guided tours as well, but the ‘unofficial’ ones were always the best.   We remember walking into a Sea World type of park in Houston as kids.  Seriously – we had just paid and walked in and Dad could hear them announcing the lineup for the Houston Astros in the stadium close by.  We turned around, walked out and went to the ball game.  It was absolutely awesome and we wouldn’t trade that memory ever.

He was raised by his parents and Grandma who were amazing characters themselves.  He once smarted off to his mom as a young adult and she threw an egg from the kitchen to hit him in the head at the front door.  He tells us, she made it across the room and caught the yolk before it hit the floor, proving that there are baseball skills in every Holick.

He had life threatening burns as a small child and his family and extended family worked hard to help and comfort him in the hospital for months.   This was during the end years of the depression and had a lifelong impact on him.   He would sometimes talk about it and would be adamant about making sure that while pots are on the stovetop, to be sure to keep the handles pointed inward so that children could not pull them off.  The impact his Aunt Mary made on him during that time was something that stayed with him his entire life.  He also had polio, a broken hip in his 50’s (fell off a roof), multiple broken noses (as you could all tell by the ‘noggin’ on his face), cancer (twice) and open heart surgery.  Why do we tell you this?   Because none of it, NONE OF IT, slowed him down.  2 days after open heart surgery, one of his kids (who shall remain nameless) went with him for a walk up the stairs (always up to the top) carrying his I.V. pole with him.   After that event, the hospital created what we call the ‘Ed Holick’ rule.  Patients in intensive care have GPS trackers now attached to them that signal if they leave the floor.  We’re actually kind of proud of that.

Throughout life he had a love for animals.  From our dog named Kluszewski (after Ted Kluszewski of the 1940’s/50’s Cincinnati Reds) to his current love – Larry (a weight challenged doggy with a serious overbite and a love for Dad as well).   Years ago however, Dad and Klu were involved in the Herman Hill riot of 1979.  He heard on the radio it was going on.  He and Klu jumped in the old truck and headed over to see it.  Listening about it wasn’t enough.  He had to experience it along with 3500 of his closest rock and roll, concert going friends.   And experience it they did.  He would tell us that he and Klu had tears streaming down their eyes from the tear gas and kids were running everywhere, police were yelling at him to ‘get out of there’  and Klu was barking and they were coughing and wasn’t it AWESOME?    He had a cat named Charlie that was something.  Charlie would grab the old screen door on the side of the house and bang it until we let him in.   2 pm.  2 am.  Didn’t matter.  His animals had as much character as he did.

Living life with zeal was not something he thought about.  It was just something he did.  If he went to eat, it was a great, great dinner.  If he went on vacation,  it was the best vacation EVER and we all needed to go together next year.  If it was a new stadium he was visiting, it was the greatest stadium ever built – other than Fenway and green wall of course.  Or Wrigley Field.  Wrigley Field wasn’t just baseball – it was a party.   It is a wonderful way to live life and that’s how he did it.  Laughing, enjoying, loving.  It was all better than ever before.  If we can learn, even just a small piece of that, what a way to live.  What a way to be.

So thank you Dad.  You made us all so much better.   No long lectures and never a spanking.  You taught us by living your life and showing us.  You loved us.  You taught us to have fun.   We all know we had the very best.  Thank you for that.    We have no doubt that the love that you are surrounded by,  at this very moment IS the greatest ever.  We love you.

To order memorial trees or send flowers to the family in memory of Edward Holick, please visit our flower store.