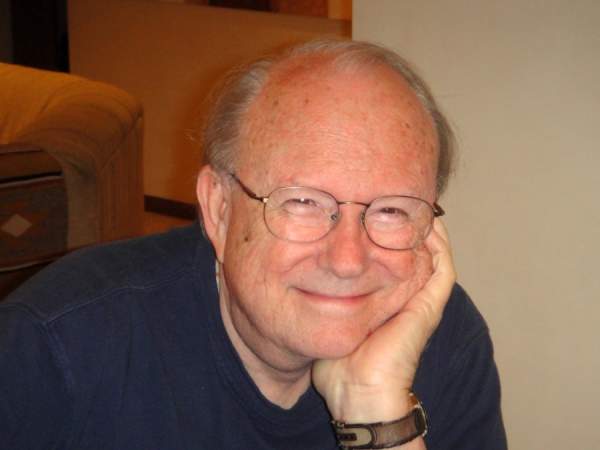 
Ed was born in 1932 in Independence, Missouri to Truman and Catherine “Irene” Pointer. The Great Depression ruled America driving his father, Truman, to travel far and wide for work. He had two brothers, Terry and David, both younger. They lived in Wichita Falls, Texas and frequently stayed with his mother’s father in Kansas City, Missouri. The Pointer family settled for a time in El Dorado, Kansas. In Ed’s junior year of high school they moved to Wichita, Kansas where Ed continued to live for the rest of his life.

After completing high school he enrolled at Wichita University to study painting. He joined Alpha Gamma Gamma fraternity, later called Beta Theta Pi, where he became friends with Frank and Dan Carney. Concurrent with his time at WU he met Marcia “Jeanne” Evans at a wedding party and knew immediately that he wanted to marry her. They were married June 10 1954 and maintained that union for 67 years. They produced three children- Michael, Pamela, and Catherine to whom they provided a stable, loving home environment.

Ed had always been the artist people turned to in school to provide artwork in conjunction with various activities, so when the Carney brothers decided to open a pizza restaurant they asked Ed to do the signage for their now famous Pizza Hut business. Ed was closely involved with Pizza Hut for many years until the sale to Pepsico. He drew the original Pizza Pete, designed menus and promotional materials as well as producing many annual reports.

Ed was always independent. He designed and built all the living room furniture for his bride. When faced with needing to provide for the future, Ed worked for Innes department store designing their windows and creating any necessary signage. He decided that there was a market for signs in Wichita and joined Pat Page to open Page-Pointer Company which later became The Poster Company.

Pointer needed a more stable income so he joined Richard Teneyck, and later Oblinger-Smith as art director. During his tenure there among many other projects he photographed the first Wichita River Festival and designed the brochure for the First Annual Fine Arts Festival.

Ed enjoyed the challenges of entrepreneurship and opened a graphic design studio that later became Visualgraphics which he operated until his retirement in 1994. During this time Ed created many familiar logos including Southwest Paper Company and MBPXL. He continued to work with Pizza Hut as well. Ed did all the graphics and packaging for product development for the new iteration of Vornado fans. In 1969 he designed a mural for the Wichita centennial which adorned the back of the city’s envelopes. In the 1980’s Dan Carney approached Ed with an idea to start a new pizza chain. He did the product development for what would become Big Cheese Pizza.

In 1977 Pointer became intrigued with the difficulties that the Metropolitan Transit Authority was having and suggested that the transit system be renamed The Bus. He became a board member and chairman from 1978-79.

Ed Pointer was first and foremost a painter. He painted in the evenings and on weekends in a semi-abstract style. He completed many painting commissions along with a large piece for Pizza Hut’s celebration of the millennium. He had always been enamored of the impressionist style of southwest painters and began to work in that direction when he retired to work full time as an artist. He exhibited extensively in the region winning many awards. Most familiar were his exhibits with Hugh Greer and Wilbur Elsea as well as four exhibits with his son, Michael, titled “A Few Good Pointers.” Ed’s work is held in the Weigand corporate collection, Mark Arts, and by the Wichita Art Museum as well as many private collections.
•
Ed came to faith in Jesus Christ as Lord in the fall of 1968 and spent the rest of his life serving his savior. He was a true student of the scriptures and studied them verse by verse digging into the ancient languages to try to get the greatest understanding of God and how best to live to honor and glorify Him. He also loved to teach what he was learning and touched many lives by hosting group Bible studies in his home. He always welcomed everyone he met with the open, accepting arms and love of Jesus. He was especially close to his four grandchildren and left in them a legacy of that love.

To order memorial trees or send flowers to the family in memory of Edwin Pointer, please visit our flower store.