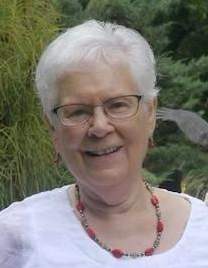 Born July 5, 1931, Evelyn (Campbell) Calderwood lived a life of faithful service to her family and to her Lord. The daughter of C. Everett and Doradell (Bailes) Campbell, Evelyn grew up in the Kansas City area and graduated from Sterling College in 1953.

Alongside Don, the loving husband of 56 years who welcomed her to glory, Evelyn raised three sons, Douglas, Brian and Timothy. Evelyn and Don spent over 30 years serving as missionaries in the country of Pakistan, where she taught math and home economics at a school for the children of missionaries. At Murree Christian School, Evelyn taught, met, and ministered to people from around the globe, many who remained dear friends, and one of whom grew up to be a beloved daughter-in-law.

After their return to the States in 1989, Evelyn continued to serve the Lord and the Presbyterian Church in many capacities. She put her math skills to use as a treasurer, her music skills into choir and handbells and her leadership into innumerable projects for the Presbytery as a whole and Trinity Presbyterian Church as a congregation.

The legacy Evelyn left behind after her passing on October 9, 2022 is a bright one, full of joy and hope for the future. She loved her sons and their spouses, doted on each of her eleven grandchildren and was even more enchanted with her seven great-grandchildren. Her wit was sharp, and her love was boundless. Our heavy hearts rejoice at the joy of her heavenly journey and look forward in hope to the day we meet again.

Memorial donations may be made to the Presbyterian Manor Good Samaritan Fund or Harry Hynes Memorial Hospice.

“My frame was not hidden from you, when I was being made in secret, intricately woven in the depths of the earth. Your eyes saw my unformed substance; in your book were written, every one of them, the days that were formed for me, when as yet there was none of them.” Psalm 139:15-16