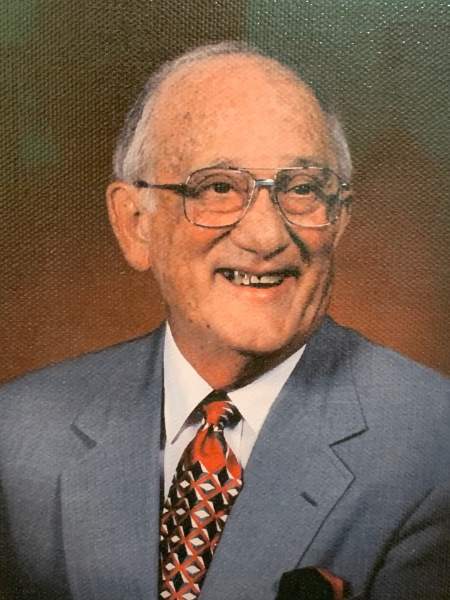 Farris Razook, 93, passed away on February 12, 2020. He was the 11th child born to Farris and Sadie Razook. He was preceded in death by his parents, his wife, Joan (Farha), and his siblings: Nim Razook, George Razook, Susie Badeen, Blanche Razook, Mabel Gaiser, Fred Razook, Ted Razook, Louise Cohlmia, Marge Cohlmia and Vivian Razook. He is survived by his siblings: Gene Razook of Wichita and Nora Courtney of Novato, CA. He is also survived by his two daughters, Cathy (Randy Ellsworth) and Nancy (Mark Davis), granddaughter, Sadie (Victor Salloum), grandsons Chris (Andrea Ellsworth), Scott (Rebecca Ellsworth), and great grandchildren, Henry, Samuel, Jonathan, Emma and Mackenzie along with many other nieces, nephews and cousins. Farris grew up in Moundridge, KS, and graduated from high school in 1944. He attended Wichita University where he was the first of his siblings to graduate from college and receive his teaching degree. His first job offer was to become a high school history teacher and coach at Walton HS in 1948. A knee injury caused Farris to lay out for one year to rehab his knee and work at Boeing. He started officiating basketball games later that year and was invited to interview for the Belle Plaine High School Teaching/Coaching position. When hired in 1952 he began an amazing high school coaching career in football, basketball and track. His first year at Belle Plaine High School his football team was undefeated and he went on to have three more undefeated seasons in 11 years. During his football coaching career at Belle Plaine High School Farris’s teams achieved 85 wins, with only 10 losses, 4 ties and he was selected as the area “Coach of the Year” twice. In May 2016, he was invited to attend the Belle Plaine High School Alumni banquet where he received the award for being, “Our Greatest Coach and Mentor” from 1952 to 1963.

Farris completed a master’s in Educational Administration from Emporia State Teachers College (1960) and became the principal of Andover High School in 1963. During his time at Andover High School, he was known for enthusiastically motivating students and continued to have a passion for high school athletics. He was the Chisholm Trail League President and the 7-Star League President. He was a member of the KSHSAA Executive Board and was a major proponent of attempts to create the Kansas Football playoff system. He was also a strong supporter of the football, basketball and track programs. While he was principal at Andover High School, the school added more sports: cross country, golf and wrestling. He, along with Mrs. Mary Chase, the high school English teacher, were responsible for establishing the Andover Trojan Night in the late 1960’s. This celebration continues to the present day with freshmen through seniors and the whole community participating. In 2014 Farris was inducted to the Andover High School Hall of Fame.

In addition to his achievements in the schools, Farris was an active member of the Midian Shrine—Touchdowners’ group, the organization that highlights the best East and West high school football players each summer. Throughout his life, Farris was very involved in each community that he worked. He has loved being a member and always looked forward to being with his church family at St George Orthodox Christian Cathedral.

His favorite memories that he shared are the special relationships he developed with his great grandchildren, various staff members, students, Andover Coffee Club and many other friends. Wherever he would go, someone always came up to him and said, “Hi Coach, how are you doing? I want you to know you had a great impact on my life!” Trasagion and funeral services for Farris will be at 6:00 pm, Sunday, February 16, at St. George Orthodox Christian Cathedral in Wichita. Interment will be at 11:00 AM, Monday, February 17, at Old Mission Cemetery. In lieu of flowers, memorials may be made to: The Shriner’s Children’s Hospital, 4400 Clayton Ave, St Louis, MO, 63110; St. George Cathedral, 7515 E 13th St N, Wichita, KS, 67206; or to St Jude Children’s Research Hospital, PO Box 50, Memphis, TN, 38101.

To order memorial trees or send flowers to the family in memory of Farris Razook, please visit our flower store.