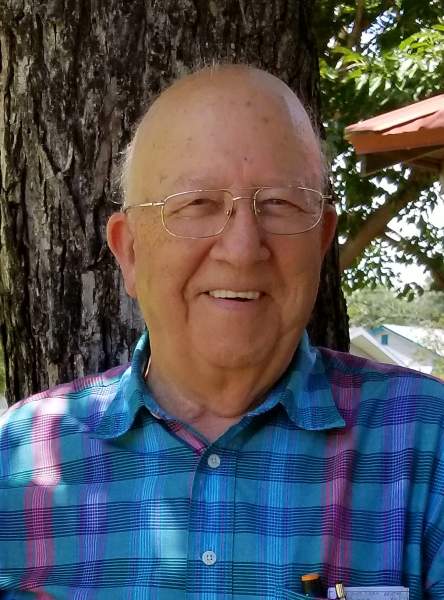 Frederick "Fred" H. Frazier, 85, passed away Wednesday, September 15, 2021 with Pat, his wife of 62 years, by his side. He was born to Carl and Lucille (Fish) Frazier on September 23, 1935 on the family farm, just south of Coldwater, Kansas. He grew up in this small farming town, alongside his 4 siblings: Denton; twin sister-Barbara Sue; Margaret Jo; and Don. Growing up in Coldwater, Fred was known as "Hugh" or "Brother" and Sue was known as "Sissy". He was one of 19 students in the Coldwater High School graduating class of 1954. As a young man, he worked as a ranch hand and sold seed packets door to door, before joining the Navy in January of 1955. His first ship was the USS Pine Island, which was sent to the Pacific area, traveling to Hong Kong, the Philippines, and Korea. Later, he was stationed in Port Hueneme, California, where he served in the US mobile construction battalion, working as a clerk in the Civil Engineer Core Officer's School. There, he met Pat Martinez, who worked as a clerk in Officer Personnel. They married on New Year's Eve 1958 at Our Lady of Sorrows Catholic Church in Santa Barbara, California, and honeymooned in Las Vegas. In January 1959, the couple moved to Wichita, Kansas when Fred was discharged from the Navy. Fred attended Wichita State University, getting his first job with the Federal Land Bank. He went on to work for several companies in Wichita as a bookkeeper and/or office manager over his career. Fred's second and most favorite career, was driving a school bus for the Wichita and Goddard school districts.

Fred was an active member of Lions Club International for over 50 years, serving in various capacities, including Kansas District Governor in 1980-1981. He enjoyed all aspects of Lions Club: working on projects such as the Sight Foundation, Candy Day, Pancake Feeds, and participating in area festivals and parades with the Moped Brigade. Fred encouraged his daughters to not only join a group, but to become actively involved. He was pleased when Grandson, Kyle, joined and the two could go to Lions Club together.

Fred and Pat have three daughters: Carolyn, Linda and Susan. Some vacations included Lions Club conventions which took them to New Orleans; Chicago; Montreal, Canada and Hawaii. Fred even traveled to Tokyo, Japan. They also made trips to California to visit Pat's family, stopping at famous sights along the way. One favorite trip included Carlsbad Caverns, Mesa Verde National Park, and Four Corners. If they passed through a state capitol city, a visit to the State Capitol building was a "must-see!"

Fred enjoyed time with family, including gatherings for holidays and the annual Frazier Family Reunion - most of which were called to order by he or Sue giving their trademark ear splitting, shrill "farm whistle". He may or may not have been one of the instigators of the annual "Frazier Water Fight". He was thrilled to have six grandchildren and took great delight in teaching them the finer things in life: to use words such as "Murgatroyd!"; the fine art of blowing the paper off a straw at whoever sat across the table from you; or how to eat black olives off each finger. He loved attending their school concerts, programs, sports activities, scouting events and church activities. He could be counted on to carefully engineer a pine wood derby car, to stack objects so a toddler could delight in knocking them down, or to ride a bike.

In lieu of flowers, the family requests memorial gifts in Fred's memory to Alzheimer's Association or Harry Hynes Memorial Hospice.

To order memorial trees or send flowers to the family in memory of Frederick "Fred" Frazier, please visit our flower store.