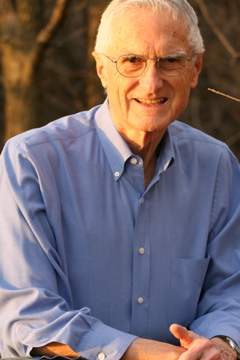 George Trewitt Fooshee Jr. met his Savior in glory at 92 years old on Friday morning, August 12, 2022.  Beloved husband, father, grandfather, and 13 times adoring great grandfather, left this world for the One he has long hoped for.  He will be tremendously missed and gratefully remembered as a loving partner, brother in Christ, and devoted shepherd of the Fooshee clan.

George had a reputation for looking forward.  As a business leader, a pilot, a Christian author and speaker, and a committed disciple maker, George devoted much of his time helping others navigate life with a specific emphasis on bringing Biblical peace and order to their personal finances.  Many point to George, and his dear Marjean’s love and care, for their growth in Christ.

George was born to George Trewitt Sr. and Lola Marguerite Fooshee on December 17, 1929, and grew up as an only child having lost a brother at birth.  Living all of his 92 years in Wichita, George became an Eagle Scout and was elected Governor of Boys State, earning a trip to meet President Truman in Washington D.C.  George met his future wife Marjean when he was 18 and she was 16, at North High School.

George graduated from SMU thanks to a full scholarship from the Methodist Church and then earned an MBA from Harvard Business School.  He later fulfilled his commitment to “pay it forward,” investing back into the scholarship program.  He called Harvard “the greatest educational experience of his life.”  George married Marjean on April 3, 1954, and he left for basic Army training at Ft. Leonard Wood just 6 months later.

George and Marjean came to faith in Jesus early in their married life and were instrumental in the church body of Central Christian Church, and then First Evangelical Free Church throughout their lives together.

He worked for Credit Adjustment Company, the business his father started. George later ran the company until his retirement in 1995.  After retirement, George served as Midwest Vice President of Crown Financial Ministries.  He authored three books on the biblical principles of financial freedom, the last two of which Marjean co-authored.

George is survived by his wife of 68 years Marjean, his daughters Jenny (Greg) Swanson, and Amy (Michael) Bankston, grandchildren Tori (Daniel) Di Bartolo, Lizzie (Jonathan) Brickley, Brad (Hannah) Bankston, and Kami Bankston.  Thirteen great-grandchildren have warmed George and Marjean’s hearts over the years. Their oldest great-grandchild is 14 years old, and the youngest will be born in October.

To order memorial trees or send flowers to the family in memory of George Fooshee, please visit our flower store.