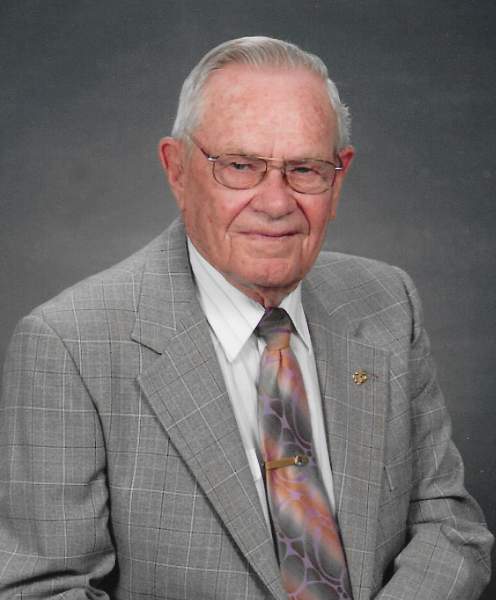 Glenn Calvin Pfeiffer, 94, retired Southwestern Bell/AT&T employee, passed away on May 6, 2021. A graveside service will be held at the Protection Cemetery on Wednesday May 12 at 1:00 p.m. Glenn was born on May 16, 1926 in Clatonia, Nebraska to Alvin and Theresia (Oltman) Pfeiffer. The family moved to a farm south of Protection, KS in 1932 where Glenn attended a country school through 8th grade then graduated from Protection High School. Glenn served in the United States Army (PFC) from 1946 to 1948 stationed at Kumamoto, Japan.
On June 30, 1951, Glenn married the love of his life, Helen Louise Harvey at the Protection Christian Church. Although he stayed busy with work and volunteering, Glenn's first priority was always his wife, children, and faith in the Lord. Glenn's job with Southwestern Bell as a Unlocated Lineman took the family many places around southwest Kansas until he became an Installer Repairman in Hugoton then in Meade. Eventually landing as a Combination Repairman in Bucklin, Kansas where he and Helen lived for 40 years. After 32 years with Southwestern Bell/AT&T, Glenn retired with a perfect attendance record. They then enjoyed traveling in their motor home and on bus tours. Traveling to almost all 50 states, as well as Mexico and Canada. He loved woodworking and gardening as well as spending time with his five grandchildren. Many days were spent playing a round of dominos or ping pong with his family and friends or working in his workshop on a new wooden toy for a grandchild's birthday. The couple moved to Newton, Kansas in 2005. Glenn continued his volunteer work through the Newton Senior Center and the Newton Christian Church where he and Helen attended. After 10 years in Newton, they eventually moved to Wichita. Glenn continued to play ping pong and dominoes well beyond his 90th birthday. He enjoyed visiting with family and friends and he would win over all those he met with his witty humor and ornery smile.
Glenn was surrounded by family when he went to be with his Lord and Savior on May 6, just 10 days shy of his 95th birthday. He is survived by his wife of 69 years, Helen (Harvey) Pfeiffer; daughters Dixie (Mike) York and Debbie (Tim) Graber; his grandchildren Michael (Sara) York, Brandon (Allison) York, Lauren (Caleb) Zogleman, Jon Graber and Matt Graber, and his great-grandchildren Alexa, Skyler, Gunnar, and Sawyer; brothers Alvin Jr. and Don; sisters, Dorothy Wimmer, Alice Deck and Ruth Bratcher. He will forever be remembered in their hearts as a great man, husband, father, grandfather, brother and friend. He was preceded in death by his parents, sons Glenn Lee and Lloyd Gene and brothers Kenneth and Dwight. In lieu of flowers, a memorial to Serenity Hospice has been established. www.cozine.com. Broadway Mortuary.

To order memorial trees or send flowers to the family in memory of Glenn Pfeiffer, please visit our flower store.