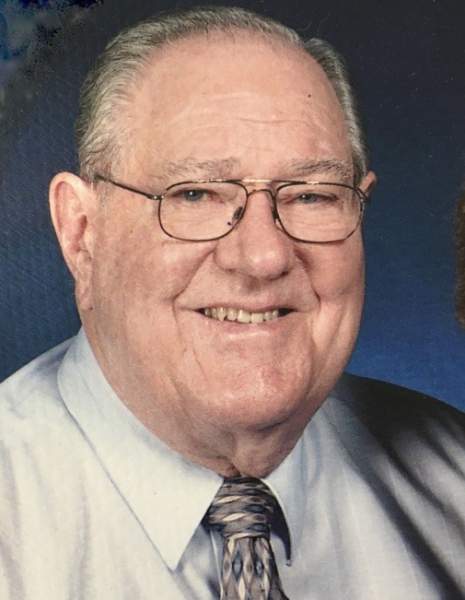 Our hearts are breaking as we mourn the death and remember the life of our father and family patriarch, Harold O. Drennen, Friday, November 20, 2020. Harold was born February 20, 1928, in St. Louis, Missouri, the first child of Claude and Lydia (Stock) Drennen.  He spent his youth in Jefferson City, Missouri where he attended Trinity Lutheran School and Jefferson City High.  He quit school in 1945, joined the United States Navy and served honorably on the USS Shannon (DM-25) and the USS Neville (AP-16, later APA-9) during WWII. He was proud to have participated in the Japanese surrender of the Island of Truk in the South Pacific. After the war Harold returned to Jefferson City, graduated from high school, and went to work for the Missouri Pacific Railroad, which brought him to Wichita.  In 1948 he was hired as a Kansas Gas and Electric lineman before transferring to Ripley Power Plant.  He helped to bring the Gordon Evans plant online and finished his career as a System Operator. Harold retired from KG&E/Westar after 42 years of service. Harold was active In the Wichita community.  He was an adult leader in Boy Scout Troops 427 and 416 for his sons.  He became a Freemason (Sunflower and Community Daylight Lodges) and a member of Scottish Rite of Freemasonry. He served as Sunflower Lodge Grand Master and Grand Tyler for the Grand Lodge of Kansas.  A lifelong Lutheran, Harold was a member at Gloria Dei in Wichita. Harold was preceded in death by his wife of almost 65 years, Helen Louise Carr Drennen, and all his siblings: Ronald, Earl (Rebecca), Juanita (Henry Skurat), Kenneth (Rose) and stepbrother, Ronald Shellenberger (Tazuko).  He is survived by his children: Kay Drennen (David Larsen), Cyd Law (Gregory), Keith Drennen (Janet), Curt Drennen (Lin), Michele Zeng (Hongbiao), and Tri Pham.  He has 14 grandchildren and 11 great grandchildren.  Private services are being held by the family, and an end of life celebration will be planned at a later date. In lieu of flowers contributions may be made to Lutheran Social Services, Lutheran Family Service and the Kansas Humane Society. Share condolences at www.cozine.com. Services by Cozine Memorial Group-Broadway Mortuary.

To order memorial trees or send flowers to the family in memory of Harold O. Drennen, please visit our flower store.