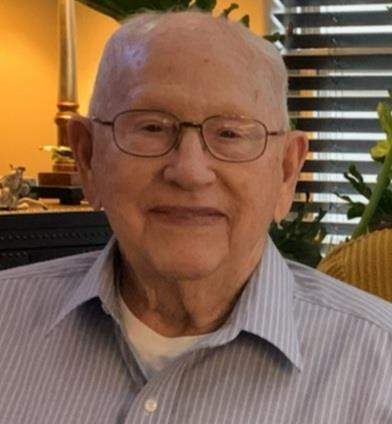 Wichita, KS-John Fred Greenwood, age 89, passed away Tuesday, December 2, 2020 with family by his side. Fred was born in Hermitage AR on March 16, 1931 to Jimmie Greenwood and Doris Stuart.
Fred served in the United States Airforce stationed at Sheppard Air Force Base in Wichita Falls, TX. After the Air Force, Fred worked in Civil Service at Sheppard for 35 years where he received numerous awards for his mechanical and engineering work.
Fred was known as a good, honest man with a servant’s heart and beloved by his family and friends. John married the love of his life, Mary Sue McLeod from Banks, AR on June 2, 1952. During their 69 years of marriage, Fred and Sue raised four children in Iowa Park, TX. During retirement, they enjoyed motorcycle riding, camping and traveling the United States.
Fred was preceded in death by his mother and father, brother Charles, twin brother Ted, and son Stuart Jay. Surviving family members include Mary Sue, wife, daughters Brenda (Ray) Garrison, Linda (Craig) Parman, Gail Jordan, grandsons Jason (Lori) Morton, and John (Tessa) Jordan, and 7 great-grandchildren.
Fred and Sue belonged to Grace Church in Wichita Falls, TX and Harvest Community Church in Wichita, KS. A private celebration of life will be held at a later date. To share a memory or to leave a special message for the family online visit www.cozine.com.

To order memorial trees or send flowers to the family in memory of John Greenwood, please visit our flower store.

Private Services will be held at a later date.