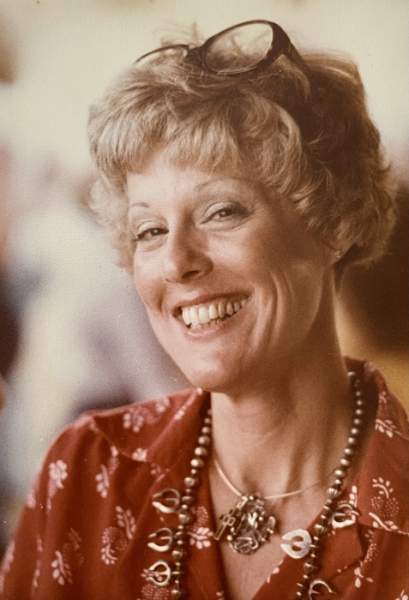 Judy Dold Higdon, painter and teacher, and most of all self-described “professional mother”, died Tuesday, October 18, at age 85.

A lifelong resident of Wichita, Judy attended the University of Arizona, Wichita State University, and University of Kansas, where she graduated in 1958 with a degree in elementary education.  She was a member of Pi Beta Phi sorority.

In 1953, as a high school senior, Judy many times described literally running into Al Higdon, with both on their way to a journalism class at Wichita East High School, and “falling in love.”  Five years later the two were married and spent their first year together in St. Louis, where Al worked in a public relations counseling firm and Judy taught school.

Returning to Wichita in 1959, Judy continued teaching, first at Price Elementary, then St. Thomas Aquinas, while Al got a second degree.  Daughter Sarah came into their home in 1966, Adam a year later and Claudia in 1968.  Thus began a number of very busy years for Judy.

In addition to being a great mom to a growing family Judy had a number of active interests.  She was a proud “Goldwater Girl” during the 1964 election, was a member of Wit and Wisdom, a founding member of what is now the advisory board of WSU’s Ulrich Museum, and later was on the advisory board of the East Branch YMCA.   At the Y Judy greatly enjoyed her thrice-weekly exercise group, which routinely adjourned to a nearby Dillon’s for coffee and “intel gathering, not gossip, mind you.”

Her painting career included two one-woman shows, with her work being purchased and hung by private collectors locally and in several states.  Additionally, she taught art both at the Wichita Center for the Arts (now MARK Arts) and Wichita State.

She is survived by Al, her husband of 64 years, and her children, Sarah Fearn (Ken), of Winston Salem, NC; Adam Higdon (Allison), of Fort Collins, CO; and Claudia Higdon, of Prairie Village, KS.  Her five grandchildren are Jennifer Fearn Santos, Kenny Fearn, Brooke Fearn Harper, Madeline Higdon and Jake Higdon.  She is also survived by five great grandchildren, and her sister, Joan Jaedicke.

The family wishes to thank the marvelously professional nursing staff at Larksfield Place and Faith Hospice for their caring competence in keeping Judy safe and comfortable these past few months.

In lieu of flowers the family asks consideration for a donation either to the Kansas Humane Society, 3313 N. Hillside, Wichita, KS 67219, or St. Stephen’s Episcopal Church, 7404 Killarney, Wichita, KS 67206.