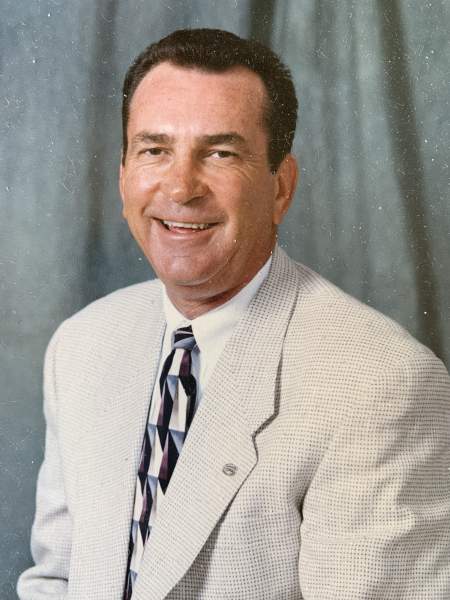 Once a shy, dirt-poor, Oklahoma farm kid, (Lonnel) Lee Frye moved to Wichita, KS to build a home, career and most importantly, a family. Having realized his dreams with all three, Lee went to his final home on November 10, 2020.

A lifetime career in the car business, fervor for Oklahoma football and passion for playing golf generated thousands of customers and friends alike. But his most joy came as a dedicated husband, father & grandpa. Lee is survived by the love of his life for 55 years Sheila Kay (Cochran), sons Bryan (Sheila R) and Brenen (Carrie Williams), and grandchildren Reagan, Carson, Peyton & Piper.

Lee entered this world at the family home in Delaware County, OK on August 2, 1946. The youngest of five children he grew up with chores, farm animals, and a one-room schoolhouse. At Grove High School, he played football, baseball and participated in 4H & Future Farmers of America, graduating in 1963. Any free time was spent at Grand Lake of the Cherokees. Legend has it that Lee once waterskied from Sailboat Bridge to Pensacola Dam without falling or stopping.

After graduation, Lee moved to Wichita KS to join his sister Beverly who was working at Kau Kau Corner, a fried chicken restaurant. There he met Sheila Kay Cochran and they married on June 19, 1965.

Lee & Sheila soon welcomed a son, Bryan Keith in 1966 followed by another son, Brenen Lee in 1968. The young family settled into a home on north Battin in northeast Wichita and Lee became manager of a nearby Kentucky Fried Chicken. One day he was honored to host the Colonel himself at the restaurant. We don’t believe the Colonel shared his secret recipe, because Lee never made fried chicken at home. His preferred meal was steak.

As a young father he coached his sons in youth football and baseball, took them on hunting trips and taught the entire family (including his wife Sheila) how to waterski on Grand Lake. The family owned many boats over the years and vacations were usually spent on water somewhere in Oklahoma or Kansas.

Lee eventually left KFC for a new career with Davis Moore Oldsmobile as a service advisor. He would go on to spend nearly 20 years in various positions – new car sales, used car sales manager and finally, general manager at Davis Moore Dodge before leaving to run a new dealership in Florissant, MO. After two years in Missouri, Lee & Sheila returned to Wichita and he joined Don Hattan Chevrolet as general manager. In 1992, Lee and his brother Joe Frye purchased Dick Hatfield Chevrolet in Augusta and renamed it Frye Chevrolet Geo. The dealership opened on April 25, 1992.

The dealership quickly became ingrained in the community sponsoring events & activities within Butler County, including the 4H & the city of Augusta. In 1994, Lee had a dream to boost seasonal business for the community. He organized a committee and together they formed Ignite Augusta, an effort to create a Winter Wonderland drive-through light display in Garvin Park. The lights were an amazing success bringing visitors from all around the region, spurring sales at restaurants and stores throughout Augusta.

Speaking of Christmas, Lee brought a tradition from Davis-Moore to Frye Chevrolet in the form of a holiday food box for every employee. In the box was everything you needed to make a Christmas dinner for the entire family from the turkey to the orange jello to the egg nog.

The Great Halloween Flood of 1998 nearly destroyed the dealership. It began raining on Friday night and continued throughout the entire weekend. By Sunday morning, up to 11” of rain drenched the area. Eventually, the Whitewater River levee on the west side of town was topped turning 7th St from a state highway into a river.

Lee sold the dealership in 2004 but continued to sell cars for a few more years before finally retiring to play golf and enjoy life. His new top priority? Being a Grandpa.

He was enormously proud of his grandchildren, often attending their school programs, musical performances or sporting events. An annual Frye Family summer vacation at Grand Lake was always the highlight of the year.

Lee’s life will be celebrated on Friday December 4 at 2PM, Central Christian Church with COVID safety measures. A memorial has been established with His Helping Hands, 1441 E. 37th St. N., Wichita, KS 67219.

To order memorial trees or send flowers to the family in memory of Lee Frye, please visit our flower store.