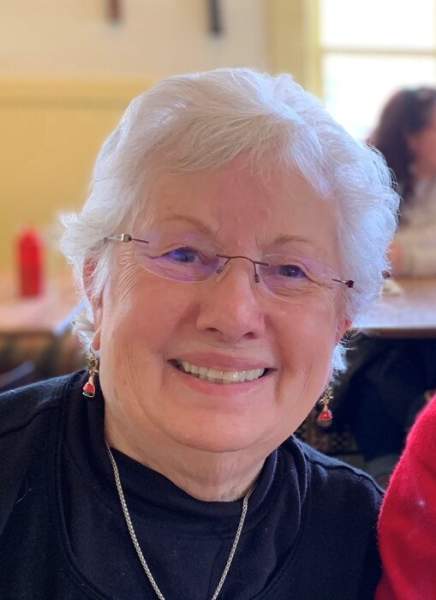 Mardelle Faye (Young) Moyers was born on October 1, 1941 to Marjorie and Ardell Young in Fort Worth, TX.  She attended Paschal High School and upon graduation entered the University of Oklahoma for 2 years before transferring to the University of Texas for 1 year and then on to Texas Christian University where she graduated with a BA in Journalism in 1963.

On December 22, 1962 – during a week’s leave from the Navy – Mardelle and Sam were married in Fort Worth at the Hemphill Avenue Presbyterian Church. Sam had recently graduated from Navy Officer Candidate School and the two wanted to get married before he was assigned to his first post.

After Mardelle graduated in early 1963, the newlyweds moved to Bremerton, WA where Sam assumed his first shipboard post aboard the USS Floyd D. Parks DD884. The Navy destroyer was in the shipyard undergoing a major upgrade which made it one of the most advanced ASW (Anti-Submarine Warfare) ships in the Pacific fleet at the time.

In the Spring of 1963, the couple moved to San Diego, CA which was the Parks home port. For the next 2 ½ years they lived in the Point Loma area of the city. While Sam was deployed to the Western Pacific for a 6-month cruise in 1965, their first child, Marjorie Kathryn (Gigi) was born in Fort Worth, TX where Mardelle’s parents lived. Gigi was named after Sam and Mardelle’s mothers, Marjorie Young and Kathryn Moyers.

After Sam finished his 3-year active-duty tour in the Navy as an officer, the family of three moved to Birmingham, AL in the fall of 1965 where Sam started his first civilian job as Director of Marketing for The Jim Dandy Company. During the next 7 years the couple made many life-long friends and celebrated the birth of their son John Edward (1966) and their second daughter Kerin (Keri) Elizabeth (1969).

During their time in Birmingham, Mardelle and Sam were both active in South Highland Presbyterian Church. With the church’s support Mardelle was the founding Director of a Pre-School (set-up in the church facilities) which served the children of international families living nearby in residence at the University of Alabama Birmingham Medical School. At the time it was the first pre-school willing to serve this population in Alabama. It was so successful that it became a model for additional schools in the state.

In 1972, the family moved to Wichita, KS when Sam joined Pizza Hut, Inc. As a new member of the Wichita community, Mardelle became incredibly involved at Grace Presbyterian Church, serving as a Senior High Sponsor with her husband, a Session Elder, and Sunday school teacher. In the community she became a volunteer delivering meals for the Wichita Meals on Wheels program. At one point she served as the Volunteer Coordinator for the entire program and fell in love with social service.

It was the experience of working with ‘those in need’ that lead Mardelle to her true calling – Social Work. In 1984 she went back to graduate school where she earned a master’s degree in Clinical Social Work from the University of Kansas.

Mardelle’s first job following graduation was as the first school social worker for the Cowley County School District. In 1988, she joined the Wichita Child Guidance Center and earned her LSCSW along with other certifications.

After several years working for others, Mardelle decided to go into private practice, working primarily with individual Adult Children of Alcoholics, MENSA patients, families, and groups.

Perhaps one of the most meaningful moves Mardelle made was opening her practice in a shared office space with her husband Sam who was a Rent-A-Center franchisee. The years of working side by side under the same roof were some of their happiest times together and a cherished memory. Mardelle retired in the fall of 1998 when Sam sold his business.

While engaged in her private practice Mardelle also served as a ‘Founding’ Board Member with Miracles Inc., a non-profit agency she helped start in 1992. Mardelle was instrumental in the development of the agency which provides services to help indigent pregnant women and women with dependent children throughout the State of Kansas. Her work with this non-profit created a path to aide women recovering from disabling conditions including addiction, mental illness, and homelessness. Mardelle served as President of the Board of Directors from 1992-2005 and continued volunteering her time and immense talents as an Advisory Member until her passing.

During the last few decades, besides her involvement with Miracles, Inc., Mardelle was most proud of her work together with her daughter Gigi as a college teacher in Social Work, a Children of Divorce facilitator and a grief counselor at KidzCope.

Starting in 2012 Mardelle began to suffer from and struggle with some serious injuries (a broken ankle and hip) and cancer. Diagnosed with breast cancer in 2017, she fought the good fight, even after a double mastectomy and a subsequent diagnosis of MDS requiring weekly treatments at the Cancer Center of Kansas.

In spite of these obstacles, Mardelle made friends and touched the lives of people everywhere she went, including the healthcare workers during her hospitalizations and cancer treatments. She had an enduring faith in Jesus and strong spiritual gifts of hospitality, prayer, serving, and helping. Her love is what came through regardless of the physical challenges she was facing at the time. Never fully able to recognize the wonderful gift she was to so many, our prayer is that Mardelle “Nana” can now see herself as God and others have seen her throughout her life, as a blessing.

For the last 4 years she has been happiest in her little bungalow back in the College Hill community. Especially during the last year during “safe at home” conditions, she enjoyed sitting on her front porch swing, talking to a friendly pigeon, working in her garden, reading, having a glass of wine, and watching Wheel of Fortune or British mysteries on tv with her husband.

Mardelle and Sam were only a few weeks away from celebrating their 58thanniversary. They have shared a full and blessed life. While this world has suffered her loss, heaven has welcomed an amazing woman.

A funeral service will be held at 3:00 pm, Saturday, December 19 at Hope Community Church in Andover, KS. T he service will be live streamed for those not able to attend in person at the following link: https://subspla.sh/kksyh3p

To order memorial trees or send flowers to the family in memory of Mardelle Moyers, please visit our flower store.