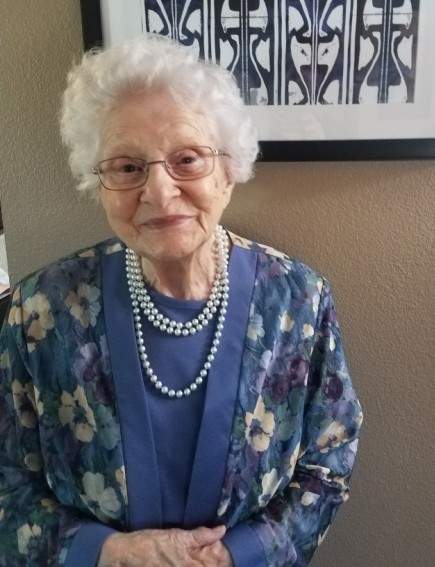 
After the death of her father when she was 3, Monica was raised by her sister Edwina and her husband Percy.  As a teenager she enlisted in the British army during World War 2. She worked in the army post office. While in the army Monica met her future husband Paul, who was an American soldier stationed in England. After the war, in 1947 she came to America and they married. They had 4 children. Monica was a homemaker. She babysat for many families through the years and cleaned houses. Her hobby was knitting, as she learned to knit when she was 5. She made baby sweaters, quilts, and pot holders for friends through the years. She dedicated her life to serve Jehovah God and was baptized in August of 1961. Monica preached about God's Kingdom and studied the Bible with many people during her life, helping them to serve God. She faithfully served Jehovah for 60 years until her death. Everyone enjoyed listening to her read the Bible with her British accent.


Monica lived in Wichita, KS for 30 years. In 1977 she moved to Denver, CO to join family already living there. She loved the mountains and made many new friends. In 2017 she relocated to Wichita. She passed away at age 97. In lieu of an in person service, a virtual memorial service was held on January 8th,  2022 at 2:00 pm, central time on zoom. David Green of Sherrelwood Congregation of Jehovah's Witnesses, Thornton, Colorado officiated.

To order memorial trees or send flowers to the family in memory of Monica Combs, please visit our flower store.