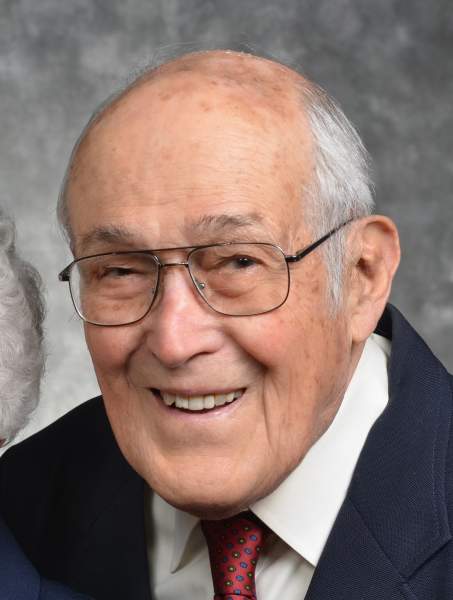 Paul A. Miller died on New Year’s Day, two days short of his 103rd birthday, after contracting Covid-19. His death should serve as a warning to take the coronavirus seriously, wear masks, stay at home and practice physical distancing. Your precautions may protect someone else, possibly an elder.
Paul was born January 3, 1918, in Kansas City, Kansas, the son of Curt and Erna Miller. He grew up in Eureka, Kansas. He graduated from Kansas State Teachers College (now Emporia State University) in 1940. He was able to attend college only because of the National Youth Administration, a federally funded project created by President Franklin D. Roosevelt during the Great Depression. Scholarships and student loans were not available in the 1930s. He taught mathematics at Thayer High School in Neosho County, Kansas, where he met Margaret J. Thompson, who had just graduated from Kansas State Teachers College of Pittsburg (now Pittsburg State University). Paul and Margaret were married in 1941 and had been within days of their 76th wedding anniversary at the time of her death in 2017. Dedicated environmentalists and active members of the Sierra Club, they were instrumental in founding the Pro Kansas/Miller Recycling Center in Wichita.
Paul worked at Beech Aircraft as an engineer from 1941 to 1983. He was the last survivor of a nine-man team that designed the Beechcraft Bonanza in the 1940s. He taught part-time at Wichita Area Vocational School and at Wichita State University. One of his accomplishments was finding a professional job for one of his African-American students at a time when Wichita was racially segregated. He also served a year as a Foreign Service officer for the United States Department of State in Palermo, Sicily.
He is survived by children Timothy, Michael, Gretchen and Jeffrey, six grandchildren and four great-grandchildren. His only sibling, Ruth Anthony, died in 1994.
He was involved in many volunteer activities, including 20 years as a Boy Scout leader, 20 years in AARP Tax Aide, in after-school tutoring programs, and in caring for the elderly. He worked with youth employment programs and with employment of the handicapped. He also served on a number of boards related to education, religion, health and community service.
Memorial gifts may be directed to the Wichita Public Library Foundation, 223 S. Main, Wichita, or Paul Miller Scholarship at Emporia State University Foundation, 1500 Highland St., Emporia, Kansas.
Plans for a memorial service will be announced later, when public health conditions have improved enough to allow gatherings.

To order memorial trees or send flowers to the family in memory of Paul Miller, please visit our flower store.