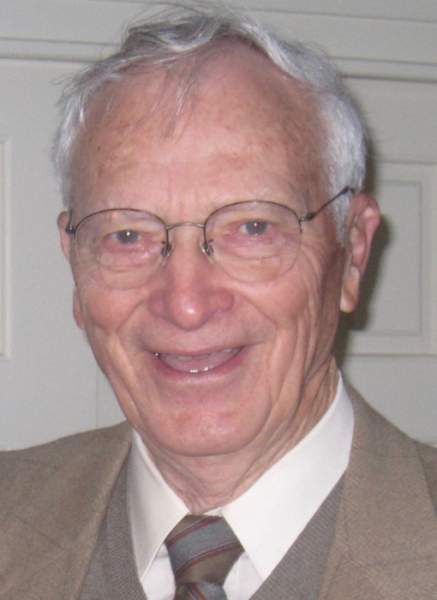 Randolph Burdette Robinson was born at the Stork’s Nest in Peabody, Kansas on October 27, 1928, to Walter and Ruth (Townsend) Robinson. He departed this world for heaven on June 29, 2021 at his home in Wichita at the age of 92.

Raised on a farm northeast of Peabody, Randy was the second of three children.  He loved growing up on the farm and rode a horse to a one-room country school. Randy graduated from Peabody High School in 1946 and then entered Kansas State Teachers College achieving a B.A. degree in mathematics & physics four years later.

On May 31,1950, Randy married Betty Joyce (Beeton). Randy and Betty were first attracted to each other when they shared a study hall in high school.  During their first six years of marriage they lived on a farm northeast of Peabody adjoining Randy’s parents’ farm. While on the farm, they brought three children into the world: Steven, Joyce, and Scott.  Two and a half years of drought made it difficult to make a living farming, so Randy decided to look elsewhere for employment and was hired at Beech Aircraft Company in Wichita as a Weight Control Engineer. He stayed with the company for 40 years and commuted every weekday between Peabody and Wichita. They moved from the farm to the town of Peabody in 1956. In 1961, Randy took on an additional profession as an independent insurance agent and realtor when he became the owner of the American Investment Company in Peabody. He worked many evenings and Saturdays “downtown at the office” and became well known and liked by many local residents, farmers, and businesses. He sold the company in 1972.  At the end of his successful career at Beech, Randy retired in 1992 as an Engineering Manager and FAA Liaison. He later served as a consultant with his brother, Richard, to aircraft fixed base operations in the area of aircraft lightning protection.

In his younger years, Randy enjoyed many hobbies including hunting, fishing, golf, and gardening (vegetables and peonies). When his sons were Boy Scouts in Peabody Troop 108, he volunteered many weekends as a leader and mentor.  He loved taking his family on annual summer vacation camping trips with his RV travel trailer to the Colorado Rocky Mountains. As a member of the Beech Flying Club, Randy attained his private pilot license in 1982.  In his later years he and Betty enjoyed many trips to their vacation home in the Missouri Ozarks where family and friends joined them to make many wonderful memories. Also, Randy was a member of the Peabody Kiwanis Club, Masonic Lodge and Shriners, and the Beech Toastmasters Club.

Randy and Betty were members of the Peabody United Methodist Church until they moved to Wichita in 1997. Randy was active in the church as a Sunday school teacher, board member, lay leader, and choir member. He and Betty joined Eastminster Presbyterian Church in Wichita in 1998 and have been members ever since.

Randy’s daughter, Joyce, married a New Zealander in 1973 and moved there and lived on a sheep farm for 25 years.  During this time Randy and Betty were able to visit Joyce and her family many times and enjoyed traveling throughout New Zealand.  After Randy retired, they even moved a small house onto the farm and lived there several months out of each year, getting to enjoy the New Zealand grandchildren.

Randy was a loving and generous father and grandfather to his children and grandchildren. His grandchildren especially loved his sense of humor. Family was so important to him. He was a wonderful Christian example for all to follow. Randy lived his faith and was selflessly devoted to his family, his friends and his life in Christ.  His wife Betty was the love of his life for more than 69 years. He will be greatly missed by his many family members and friends.

A memorial service will be held July 16, 2021 at Eastminster Presbyterian Church at 10:30 a.m.  An inurnment will follow at 2:00 p.m. at Prairie Lawn Cemetery in Peabody, Kansas.

Memorial contributions may be made to Eastminster Presbyterian Church, 1958 N. Webb Road, Wichita, KS  67206 or for playground equipment at the Peabody Park. Make check to “City of Peabody” and in the memo line add PH4HP (Peabody Hearts for Hart Park). Mail to City of Peabody, 300 N Walnut, Peabody, KS 66866. Share condolences and view extended obituary at www.cozine.com. Services by Cozine Memorial Group-Broadway Mortuary.

To order memorial trees or send flowers to the family in memory of Randolph Robinson, please visit our flower store.