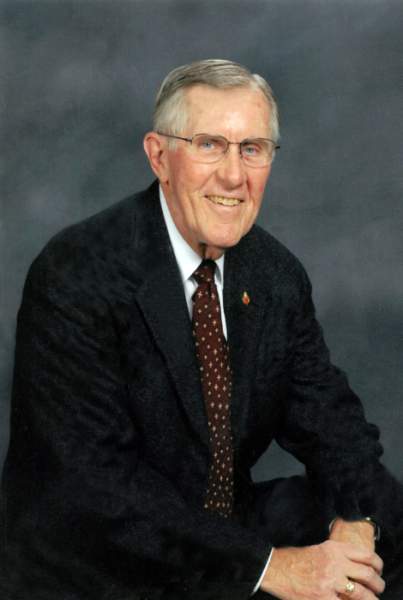 Ron was born in Chicago, Illinois to Helen and Murray Myers.  After graduating from Evanston High school in 1949 he attended Lawrence University in Appleton, Wisconsin, where he graduated in 1953.  While at Lawrence Ron majored in History and Economics, played basketball and tennis and was President of Phi Delta Theta fraternity.

After college Ron joined the Navy attending Officer Candidate School in Newport R.I. Following his graduation as an ensign he married his college sweetheart, Pat Scott.  Pat and Ron spent their early years in the Navy stationed in Norfolk VA., and then to Pensacola, Fl., where Ron served on the aircraft carrier Saipan.

In 1957 he returned to civilian life and he and Pat moved to Milwaukee, WI., where he started a career in sales that would span close to 40 years first for Ryerson Steel and eventually moving to Wichita in 1973 as Sales Manager for Milwaukee based Grede Foundries.

While Ron’s vocation was sales his avocation was helping people.  He was an active member of downtown Rotary, serving as the program chairman, and as a dedicated reader to children in the Rotary Reading is Fundamental program.  Ron also served on the Salvation Army Board and a yearly volunteer on their Angel Tree program.  Additionally, Ron was president of the Red Cross Board.  In his time volunteering for the Red Cross he drove 68,000 miles taking people to doctors appointments as well as working the 7PM - 7AM shift when there was a disaster.  And in his spare time Ron read for the blind on the radio, delivered meals on wheels for years volunteered for Harry Hynes Hospice visiting people and delivering medication and  ushering at Eastminster Church.

Ron maintained his love of tennis throughout his life.  He was a wonderful tennis player and made many friends through the sport.  Ron and his doubles partner, Bill Thompson, were a real force in the senior men’s division playing in two national and Missouri Valley tournaments for many years. He also was able to consistently beat his children well into his 70’s.

Even with all of these activities Ron’s primary passion and focus was his family.  He was always active in his children activities whether it was coaching their teams or watching them participate and, with Pat, raised four wonderful children.  He is survived by his wife of 67 years, Pat, and his sons: Bruce (Joyce), Scott (Luvie), Douglas (Janice) and daughter, Janice Lucas (Bill).  He has eight wonderful grandchildren: Luvean (David), Abigail (Christopher), Owen (Josie), Connor (Bridget), Shelby (Chad), Robert Lucas, Alex Lucas and Molly Young (Nate) and three great–grandchildren.

A memorial service will be Saturday, June 26 at 10:00 a.m. at Eastminster Church Chapel, 1958 N. Webb Rd. Memorials have been established with the Salvation Army and Meals  on Wheels. Share condolences at www.cozine.com. Services by Cozine Memorial Group-Broadway Mortuary.

To order memorial trees or send flowers to the family in memory of Ronald Myers, please visit our flower store.