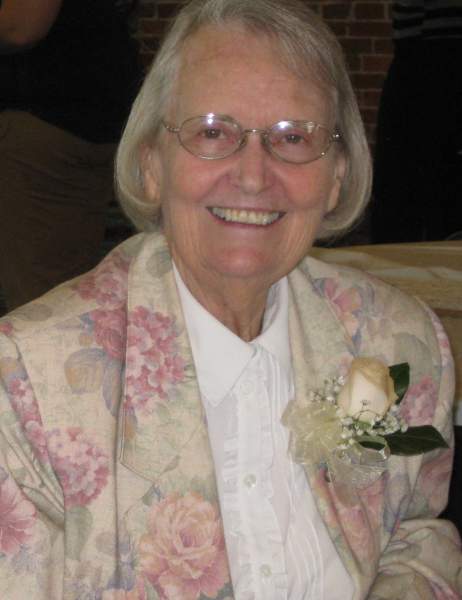 Shirley Jean Applegarth, 85, Wichita, KS entered into eternal rest of her Lord and Savior, Jesus Christ on Thursday, Dec. 3, 2020.  She was born to Frank & Mildred Sapp on Feb. 25, 1935 in Hoxie, KS.  She earned a Bachelor’s Degree from Kansas State University, and a Master’s Degree from Emporia State University and taught home economics for 30 years.  Even after her retirement, she still enjoyed working with kids as a substitute teacher.  She was active as a representative of the Kansas Wheat Commission and enjoyed sharing her life-long love of wheat that began as a young farm girl.  Additionally, she enjoyed serving in her church as a youth director, teaching Sunday School classes, and leading adult women’s Bible studies.  She lived her Christian faith and enjoyed any time spent with fellow Christians.

She married Ray D. Applegarth on July 7, 1958 in Colby, KS.  They began raising their family in Smith Center, where their two daughters were born, but soon moved to Denison and on to Holton.  In 1999, they moved to Wichita, KS to be closer to family.  Jean was preceded in death by her parents, her sister, Janis, and her husband, Ray.  Survivors include their daughters, Kimberly (Najah) Amin of Moreno Valley, CA and Julie (David) Sutton of Wichita; her brothers, Jon (Priscilla) Sapp, Topeka and Gregg (Cheryl) Sapp, Houston, TX; her step-children, Susan (Bryan) Lewis, GA, Robert (Gerry Lynn) Applegarth, Bentonville, AR, and Deborah (Wayne) Babin, Baton Rouge, LA. Grandchildren include:  Kamaran Amin, Lana Amin, Andrew (Nalani) Sutton, Steven (Holly) Sutton, and Jordan Sutton.

Jean’s memories of her childhood on the farm were reflected in her adult life.  There was always a garden with fresh produce wherever they lived.  She and Ray milled their own wheat to produce the ever-popular breads and cinnamon rolls that she was famous for.  She would always identify the seasons of the year by elements of nature.  The two most important to her were the stages of wheat from planting to harvest and keeping track of the longest and shortest days of the year. She especially loved looking forward to extended hours of daylight during the summer.

She was a born leader.  Even in her high school years, she joked that she was the president of every club she belonged to.  Throughout her life, there were countless projects that she would passionately commit to:  everything from Denison community box suppers, and in Holton, catering proms & dinner theatres, and making thousands of funnel cakes for French Market.  As an effective leader, she knew how best to organize and delegate, giving worth to all who were involved.  Even the cleanup of dinner dishes at home was assigned to A team and B team dishwashing crews.  (You all know what team you were on…) Also, on the home front, every grandchild had a hand-made quilt, and creative arts and crafts abounded, leaving a treasure of not only fun memories, but beautiful keepsakes.

Above all else - all her traits and personality characteristics, Jean was a woman of faith who loved God.  After Ray’s funeral, she would share thoughts she wanted included in her funeral service:  “She loved her Lord,” “Eternal life has started for Jean,”  “This is a time of celebration,” and in her own handwriting, “The best is yet to come.”  We cling to that and thank God for the sweet memories we share of Jean’s life.

To order memorial trees or send flowers to the family in memory of Shirley Jean Applegarth, please visit our flower store.