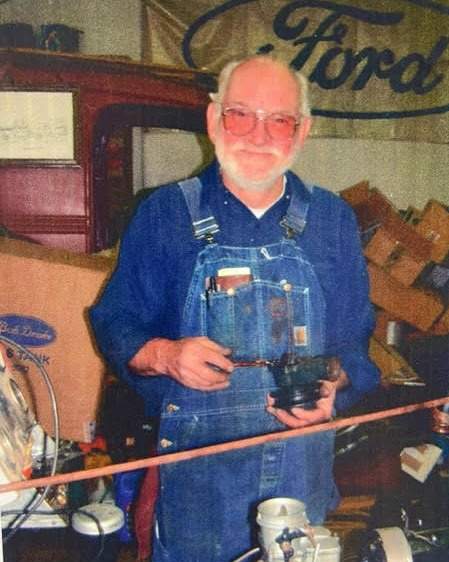 West Side Church of God

He graduated from East High in 1951, joined the Army National Guard at an early age and remained an active member until 1970.  In 1969 he became one of five charter members of the Wichita Regional Group of The Early Ford V8 Club of America.
Warren enjoyed drag racing and shared ownership in a dragster sponsored by Kottwitz Motor Co. of Great Bend and traveled to the airports of various cities to participate.  Fatherhood gradually put an end to that as his sons grew older, he became not only the scout master of Kellogg School Pack 655  but the PTA president from 1969-70.  His membership in the Early Ford V8 Club became one of his main social activities as did buying old Fords. In 1980 Warren discovered the thrill of snow skiing and enjoyed that for several years.  Although his grandfather Brandes was a Nazarene Pastor and he attended a Lutheran Church whenever visiting his father, he didn’t start attending church regularly until about 1991. When he made that decision, he accepted Christ and was baptized and attended West Side faithfully until the end of September this year.  He belonged to the church choir until his COPD prevented his singing full-time.  He very much enjoyed the Gaither’s and immediately fell in love with “Mary Did You Know?” and accompanied by Gary Carroll on guitar, was the guy that had first pick at singing it at Christmas time.  BrandFord Garage  specialized in 32-53 V-8 cars and trucks, Lincoln convertibles, retractable hardtops, electrical wiring and motor repair and operated until about the time Warren turned 80.   He still went to the his garage everyday but Sunday and enjoyed reading, listening to Rush Limbaugh, visiting with friends who called for advice, and unfortunately, smoking. Circumstances prevented him spending much time in his “get-away” this past year and plans were made to move with Sherry to assisted living/memory care but it was determined he should be in skilled nursing/long term care and he was taken to Park West on October 28th. Sunday, November 6th, as death appeared imminent his wife Sherry, son Jay with wife Trina, son Mike, and grandchildren and great grandchildren in Wichita hurried to his side. His son Greg with wife Shannon arrived from Florida the next evening. After all visitors had left, Warren passed away at 1:20 am on November 8th with his wife Sherry by his side. He was loved and will be greatly missed.

To send flowers to the family in memory of Warren Brandes, please visit our flower store.

West Side Church of God