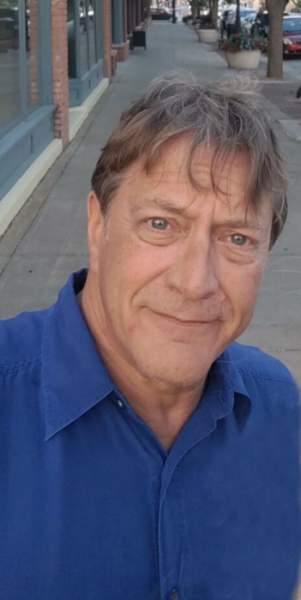 Wayne Adair Wentling, born October 5, 1959, died on Saturday, September 11, 2021. Wayne was born at St. Joseph Hospital in Wichita to Ralph Adair Wentling and Cathryn Louise Wentling, who preceded him in death. Wayne is survived by his wife Connie D. (Ellingson) Wentling and her son, Alex J.
Burroughs, Wayne’s son Ian, his daughter Tasha, and his sister Janet L. (Wentling) Friend, and her sons Travis W. Friend and Drew Friend. Wayne came from some humble beginnings, son of Ralph an accomplished trim carpenter and Cathryn, a wonderful stay at home mom. Wayne was always an excellent student and loved learning as a lifelong process. He frequently said that education was the hope of the world. He graduated from Haysville’s Campus High School in 1977, where he played in the Symphonic Band and also lettered in varsity tennis. He believed that tennis taught him diplomacy, fairness, perseverance, mental toughness, how to win and lose graciously and how to be a fierce competitor who never liked to lose. He was very proud that
Tasha had that same competitive spirit in her chosen sport of gymnastics. Wayne worked to pay his own way for college and always said that his time at Wichita State University changed his life for the better. He graduated with honors with a Bachelor’s degree in Business Finance in 1981. He credits one special professor, Francis J. Caulkins, with instilling in him what became a profound interest in finance and especially the financial markets. He strongly encouraged his children to get a good education. Both children followed through with Ian achieving a degree in Entrepreneurship and Tasha a degree in Graphic Design, both from Wichita State. He was very proud of both of his children and always wished to spend more time with them. In 1980, Wayne met the woman he would marry in 1987 and his children were born of that marriage, which ended in 2012. They enjoyed many happy times together, traveling extensively, enjoying Ian’s love for hockey, guitars and computers, and Tasha’s love of gymnastics and art. Following graduation, Wayne went to work for the Coleman Company as an Assistant Credit Manager. After a year and a half, he knew that he didn’t want to spend his career managing credit, but rather engaging in the financial markets. In 1982, he joined Merrill Lynch as a stockbroker. After three years, he moved to PaineWebber, where he spent the following twenty years. After PaineWebber was taken over by UBS, he began to believe his clients would be better served at a smaller, more client-centered
firm. Wayne left UBS in 2006 to join AG Edwards. Mergers with Wachovia Securities and subsequently with Wells Fargo left Wayne with the last brokerage firm of his career, Wells Fargo Advisors, as the First Vice President of Investments. His philosophy was always to take good care of his clients first, knowing
that that would, in turn, take care of Wayne and the firm. He was always a cautious, value-oriented investor and loved his work because he was paid well to make a positive difference in so many people’s lives. He always said it was the best job in the world and it thoroughly changed his life. He loved his
clients and valued all the positive remarks and referrals that came with happy clients. About ten years later, when he had become established in his career and had time and money on his hands, he began to train to participate in USTA tournaments around the region. For over twenty years, Wayne was ranked in Kansas and in the Missouri Valley Tennis Association. In 1996, he served as President of the Kansas District Tennis Association, which he led until 2000, he subsequently received the President’s Award for his service. Wayne continued to play competitive tournament tennis into his 50s, and won his last tennis tournament, the Hutchinson Open at age 50. He credits a Wichita Racquet Club tennis pro, friend and confidant, Myron Pushyk, with helping to improve his game over a number of years. Myron was later the best man at Wayne’s 2014 wedding. In 2012, Wayne met his “Stunning Mystery Companion,” Connie Ellingson, whom he credits with pulling him out of the crash landing he was in after the dissolution of his prior marriage. They were married on July 25, 2014 at the same restaurant where they met, Wichita’s iconic Larkspur Bistro and Bar. They made it a tradition to celebrate at the restaurant on each of their subsequent anniversaries. Wayne truly believed that Connie saved his life, coming along as just what he needed, just when he needed it. They laughed, traveled, shared many interests and created a union that withstood the strong disagreements they had over a number of different topics. Connie sometimes could not understand Wayne’s weird idiosyncrasies and would often wish that he could “just be normal!” He always replied, “Normal is overrated!” Wayne, Connie and Alex went on many trips, including Alex’s first snow-skiing trip and five Disney Cruises, taking them to several locations in the Virgin Islands and the Caribbean Islands, as well as trips to Cocoa Beach, Destin, Marcos Island, New Orleans, Seattle and Scottsdale. Wayne absolutely loved red wine, especially the Cabernet grapes grown in Napa, California. He frequently traveled to Napa seeking to find new jewels for his collection. Wayne was a very sentimental guy and a good song or story could easily bring him to tears. He liked every kind of music except rap and jazz. One of the artists Wayne favored was Warren Zevon, who famously said, “Enjoy every sandwich.” Zevon said, “I write songs about things that I’m simultaneously trying to not think about.” Wayne often did the same thing, not with songs, but with his musings that could be found all around the house, on so many scraps of paper. The songs Wayne loved the most were, “Imagine,” “Keep Me in Your Heart” for a while and “All You Need is Love.”

To order memorial trees or send flowers to the family in memory of Wayne Wentling, please visit our flower store.