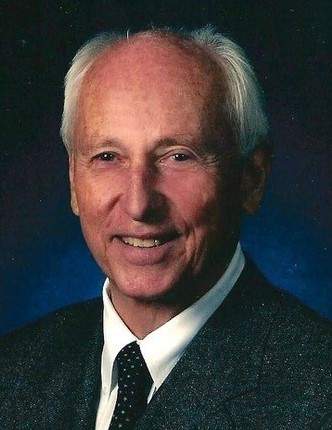 Willard (Bill) Brooks Thompson passed away on Tuesday, January 25, 2022 at the age of 91. He was born on February 16, 1930 in Wichita, Kansas to Dwight Henry and Katherine (Brooks) Thompson. He spent his early childhood in Pratt, Kansas.

After the family moved back to Wichita, Bill attended College Hill Elementary and later, Hyde Elementary. His earliest memories included spending summers at the Agua Negra Ranch in Santa Rosa, New Mexico. Starting at age 7, his parents would send him unaccompanied on the train from Newton, Kansas every summer to be with grandparents and cousins.

Bill attended Robinson Junior High and Wichita East High School, where he was a member of both the varsity swim team and tennis team. He also was a member of the social group, The Tally Ho Club. During the summer of 1946, Bill attended the Culver Summer Naval School, a camp provided by Culver Military Academy. (Bill’s father attended Culver Military Academy, a prep school for military service. Years later, Bill’s son, Mark, would also attend the Culver Summer Naval School, following in his father’s footsteps.) Bill graduated from East High School in 1947.

After graduation from high school, Bill attended the University of Kansas School of Business. While at K.U., he competed on both the swim team and tennis team. He was a member of the Phi Gamma Delta Fraternity, serving as rush chairman. It was during his years at K.U., that his father purchased the farm and cabin in Cunningham, Kansas. This became a favorite destination for the Thompson family for generations to come. At the age of 17, while at K.U., Bill was baptized and confirmed at Canterbury House of Lawrence, an Episcopal campus ministry.

Upon graduation from the University of Kansas, Bill returned home to Wichita and worked at the Harris Burns Insurance Company.

In 1952, he enlisted in the United States Navy and attended Officer Candidate School in Newport, Rhode Island. He graduated as “Ensign” on May 23, 1952. Two days later, on May 25, 1952, Bill married Jane Floyd at the Christ Episcopal Cathedral in her hometown of Salina, Kansas.

Immediately following their marriage, Bill received orders to report to the USS Foss, D.E. 59, which was then dry-docked for repairs at Long Beach, California. Bill and Jane made the move to San Diego. In the Fall of 1952, the ship was ordered to Pearl Harbor during the Korean War. While headquartered in Guam, the ship patrolled the Southeastern Pacific for a period of six months. During this time, Jane returned home to Salina, Kansas.

In 1953, the ship returned to Pearl Harbor (Oahu) with the mission of protecting the Hawaiian Islands. The move allowed Jane to return to Hawaii as well. Soon after, Bill received orders for shore duty in the Naval District and worked in the office in charge of the Naval Reserve.

On April 4, 1955, Bill and Jane welcomed the arrival of their first son, Mark, at the Kapiolani Hospital in Honolulu, Hawaii. The following month, on May 23, 1955, Bill was released from active duty. The family then moved to Pratt, Kansas where Bill worked for his father’s insurance agency, specializing in oil & gas and farm operations.

Two years later, on February 26, 1960, the family grew once again with the arrival of son, David.

In August, the family moved to Wichita and Bill joined the law firm of Brooks & Brooks, which was founded by his grandfather, C.H. Brooks. The firm is now Fleeson, Gooing, Coulson & Kitch.

Bill practiced Trust and Estate law for 56 years. During his law career he was a member of the American College of Trust and Estate Counsel and served on the Executive committee of the firm for 30 years.

Over the years, Bill volunteered his services to many local boards, including the United Way of the Plains; Hospice, Inc. (Harry Hynes Memorial Hospice); Wichita Rotary Club (where he served as president); KETCH; Episcopal Social Services Venture House; Union Rescue Mission; and he was a loyal volunteer to Senior Services (Meals on Wheels) and Breakthrough. He and Jane helped to spearhead the origin of St. Stephen’s Episcopal Church in 1984, where he served on the vestry, as well as other various committees.

On August 18, 1998, Jane, Bill’s wife of 46 years and mother of three sons, sadly died after a 4-year bout with breast cancer. In September of 1999, Bill married Barbara (Lemert) Wagnon. Together, Bill and Barbara spent 22 wonderful years continuing Bill’s love for travel, the Pratt Cabin, Bridge, and any time shared with family and friends.

Bill was a kind and caring man. His warm and gracious smile and encouraging love for people will be greatly missed by all who knew him. He leaves a lasting legacy.

Bill was preceded in death by his parents; his two sisters, Jane (Jack) Spines, Martha (Chain) Healy; his brother, Dwight Henry “Tom” Thompson and his son, Mark, 10 days prior to Bill’s death.

A combined Celebration of Life service for Bill and Mark will be held at 3:00 pm, on Saturday, February 5th, at St. Stephens Episcopal Church, 7404 E. Killarney Place. For those unable to attend in person, the service will be live streamed at the link below. In lieu of flowers, memorials have been established with Rotary Club of Wichita – R.I.F. Program, 100 N. Main, Suite #1003, Wichita, KS 67202 and Harry Hynes Memorial Hospice, 313 S. Market, Wichita, KS 67202.

To order memorial trees or send flowers to the family in memory of Willard (Bill) Thompson, please visit our flower store.