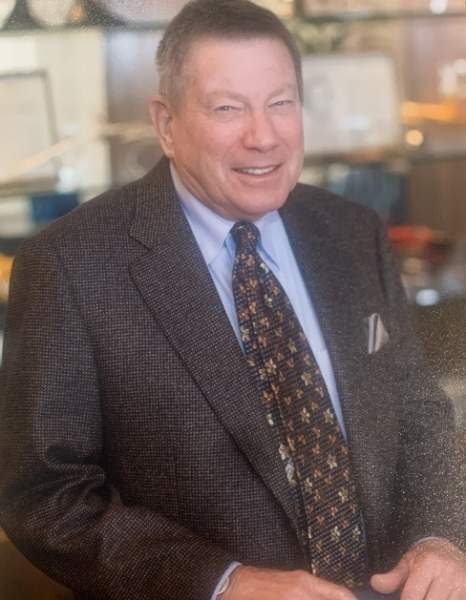 William L. Oliver “Bill” Jr.  lost his battle with pneumonia and peacefully died on Friday, May 28 with his loving wife, Mary Lynn, by his side.

Always proud of his Oklahoma roots, Bill was born July 31, 1938 in Oklahoma City, OK to Irene and William L. Oliver, Sr.  The family later moved to Ponca City, OK where Bill’s father worked as a golf professional, and because of this exposure to the game at such an early age, it became one of the first loves of his life.  Bill worked on the golf course for his father and competed in tournaments throughout his childhood and high school years earning a golf scholarship to the University of Oklahoma where he received a BA in Business Administration. After graduating from OU in 1960, he went on to law school graduating in 1963 as top five in his class.

After graduating law school, Bill was offered a job with Collins, Martin, Pringle & Schell (later to become Martin, Pringle Attorneys at Law) and relocated to Wichita, thus beginning his lifelong love affair with the city.  After 10 years at the firm, he helped form the product liability division for aviation cases, particularly involving Beech Aircraft, where he spent the rest of his legal career.  He loved the challenge of litigation and was known for the relationships he built with legal colleagues across the globe.

To quote a colleague, “Bill was known nationally as one of the finest aviation lawyers that there ever was”. Bill would often joke that he had only ever had one paycheck from one employer during all of the 55 years of his practice before he retired from Martin, Pringle in 2018.

Bill was a man of many interests including a leadership role as Managing General Partner of the Wichita Wings indoor soccer team in the 80s. He knew the players, enjoyed attending the games with his family and often went to the national meetings of the MISL always promoting the Wings.  Former Wing Coach Roy Turner said of his love and support of the Wings, “He was a driving force in making Wichita a major league city. It was his destiny to make us great”.

Bill loved music of all kinds from Cajun to steel drum, Jimmy Buffet to Rod Stewart, Gypsy Kings to Opera, and he served as Chairman of the Wichita Grand Opera for 3 years helping to promote and expand its success in Wichita.

Another interest of Bill’s was field trialing with his Brittany Spaniels at the Oliver Ranch in the Flint Hills and various other locations in Kansas.  Although he was not an experienced rider (he and his horse came back to camp separately during his first three trials) his riding skills eventually improved.  He even went on to watch one of his beloved dogs capture a national championship in Booneville, AK, something Bill was exceptionally proud of.

However, golf remained his true passion.  He enjoyed competing in many tournaments throughout the years - whether it was the Trans-Miss, U.S. Amateur, British Amateur, or a multitude of country club tournaments, he had a true love and respect for the game.  Later in his life, a simple day on the course with his friends or family was something he truly cherished.

Domestic and world travel was something he and his wife, Mary Lynn, really enjoyed doing together.  They were lucky enough to have visited many countries all over the world.   He was a lover of history and would study the geography and culture of the exotic locations they would visit.  Having an impeccable memory, he could captivate people with his stories of the places he went and the people he met along the way.

As we say goodbye, we will remember Bill for his wit and wisdom, his multitude of diverse hobbies, and his dedication to his vocation and family.  He was a person we admired and respected and for a life well-lived.

Memorials have been established at the Sedgwick County Zoo: Bill Oliver Okapi Memorial and at the Kansas Nature Conservancy in memory of Bill Oliver to support Tallgrass Prairie Conservation in the Flint Hills.

To order memorial trees or send flowers to the family in memory of William Oliver, Jr., please visit our flower store.